A MAN appeared before the Princes Town court yesterday charged with kidnapping, raping and buggering a 62-year-old stroke victim.

Public Services Association (PSA) president Watson Duke may have to relinquish his duties if he is eventually charged by police in relation to an allegation of rape made against him by a lawyer attached to the union this week.

Duke, who was held by police after surrendering for questioning on Thursday, remained detained in a cell at the Central Police Station, St Vincent Street, Port-of-Spain, up to late yesterday.
END_OF_DOCUMENT_TOKEN_TO_BE_REPLACED 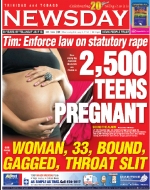 THERE ARE an estimated 2,500 teenage pregnancies per year, including several cases at the primary school level, Minister of Education Dr Tim Gopeesingh said yesterday as he called for the enforcement of laws against statutory rape in order to address what he said was a “huge”, “frightening” and worsening problem.

The minister linked the problem to social conditions, saying half the population now live in single-parent homes.
END_OF_DOCUMENT_TOKEN_TO_BE_REPLACED

Four men are now in police custody for the robbery and rape of the Central mother and daughter and police say the arrest of a fifth man in connection with the incident is imminent.

Masked men broke into the family’s house in Longdenville, Chaguanas, around 2.30 a.m. on Thursday, raping the 49-year-old mother and her 17-year-old daughter and beating her two sons who were at home at the time. They stole cash and jewelry and the family’s car.
END_OF_DOCUMENT_TOKEN_TO_BE_REPLACED

The Society wrote to media houses to support the Evidence (Amendment) Bill 2010, under debate in the Senate, which makes it easier for victims of sexual abuse to testify in law-courts.
END_OF_DOCUMENT_TOKEN_TO_BE_REPLACED

The murder/suicide took place off Bancroft Trace, Freeport, on a deserted track about four miles from Ramsaroop’s home in Arena Village. Late yesterday, both Ramsaroop’s and Mohammed’s relatives were trying to find out what had caused the murder/suicide.
END_OF_DOCUMENT_TOKEN_TO_BE_REPLACED