Some people described the killing of Andrea Bharatt as “monstrous”, “brutal”, “horrible”, and “barbarous”. Those responsible for her death were called “monsters” or “Lucifers in the flesh”.

An autopsy showed the horrendous manner in which Andrea was killed. Rich and poor, Africans and Indians, urban and rural folks, were all repulsed by the barbarity of her killers.
END_OF_DOCUMENT_TOKEN_TO_BE_REPLACED

I was wondering how many more candlelight vigils that seemed to be a genuine groundswell of public opinion on violent crimes against women would be staged in the name of abduction and murder victim Andrea Bharatt before two-by-two politicians sought to hijack what they would see as a mass movement they could ride for narrow self-interests, from photo-opportunities and media coverage to the prospect of political power.
END_OF_DOCUMENT_TOKEN_TO_BE_REPLACED

THE outrage expressed by many people over the most recent case of the abduction and murder of a young woman is understandable.

We cannot believe that there exist among us depraved people who are capable of committing atrocities, inflicting extreme violence on women with seemingly consummate ease and callous detachment. It’s as if they are cast in some science fiction horror movie, acting out their darkest obsessions and cruellest fantasies, except the victims are real live people who end up very dead, sometimes mutilated and tortured before they die.
END_OF_DOCUMENT_TOKEN_TO_BE_REPLACED

With the Carnival season now in full swing, police are warning people who plan to gyrate on others that they can be arrested for assault if the person they want to “thief a wine on” decides to engage the police.

Speaking at the weekly media briefing yesterday, public information officer of the Police Service ASP Michael Jackman said it is an assault to touch someone without their consent.
END_OF_DOCUMENT_TOKEN_TO_BE_REPLACED

Amidst an avalanche of allegations of sexual misconduct against a phalanx of prominent men, mostly in the USA, but also in other developed countries, one can anticipate a similar surge here in Trinidad and Tobago, although our litigation procedures are more constrained, some might argue restrictive, than in those jurisdictions. I argue, too, that cultural differences influence the way the local public, if not the courts, view such allegations.
END_OF_DOCUMENT_TOKEN_TO_BE_REPLACED

On Monday evening, like so many people across America, I attended a vigil in honor of the 49 people who were gunned down at Pulse Night Club in Orlando just because some folks hate gay people. I was on my way to London but stopped in Wellesley, Massachusetts, to gather my papers and other necessities for my trip. In that small town of 28,000 people, about fifteen miles outside of Boston, I joined about three hundred people on the lawn of Wellesley’s Town Hall who had come together to stand in solidarity with those who had lost their loved ones in Florida.
END_OF_DOCUMENT_TOKEN_TO_BE_REPLACED

WE CONDEMN the flagrant violation of the privacy of a wide range of citizens which has been brought to the fore in recent weeks. Further, we also condemn the blatant – and sometimes politically-motivated – instances of victim shaming which have accompanied these incidents.

A MAN appeared before the Princes Town court yesterday charged with kidnapping, raping and buggering a 62-year-old stroke victim. 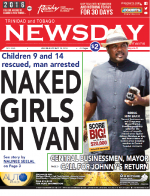 According to reports, at about 10.50 am, a party of officers led by Ag Sgt Ramlogan and including PC Leelum and others were on an exercise when they observed a heavily tinted black Nissan Navara van parked in an abandoned Caroni Ltd cane field near Cedar Hill Estate in Barrackpore. Officers instructed the driver to come out of the vehicle and submit to a search, but he instead started the engine and drove off at high speed. Officers gave chase and the van was intercepted and forced to stop a short distance away. The officers quickly surrounded the van. What they saw inside made them recoil in horror and revulsion. They saw a 14-yearold girl, naked and lying on her back on the front passenger seat which was reclined. On the backseat, also naked and lying down, was a nine-year-old girl. Both children appeared disoriented.
END_OF_DOCUMENT_TOKEN_TO_BE_REPLACED

Public Services Association (PSA) president Watson Duke may have to relinquish his duties if he is eventually charged by police in relation to an allegation of rape made against him by a lawyer attached to the union this week.

Duke, who was held by police after surrendering for questioning on Thursday, remained detained in a cell at the Central Police Station, St Vincent Street, Port-of-Spain, up to late yesterday.
END_OF_DOCUMENT_TOKEN_TO_BE_REPLACED