To think that once upon a time, many years ago, I actually considered pursuing law as a profession. Naïve, idealist I, would have been torn apart by the dogs of law, drawn and quartered by the merchants of justice, or, who knows, I might have succumbed to the practitioners’ code of compliance, casting aside shame and dignity, fight for my slice of the largesse from the multi-million dollars in “briefs” advocates at stake every living-or-dying day in this country. So much litigation.
END_OF_DOCUMENT_TOKEN_TO_BE_REPLACED

No one has challenged Opposition Member of Parliament Roodal Moonilal’s assertion that the arrest and indictment of former Attorney General Anand Ramlogan last week was a “distraction by the PNM”. Moonilal is reported to have said: “…This is the modus operandi of the PNM, whether it is Basdeo Panday, Vijay Naraynsingh, Sat Sharma…to harass, to intimidate, to oppress and suppress independent voices against the PNM and their government…”
END_OF_DOCUMENT_TOKEN_TO_BE_REPLACED

Anand goes to court Friday, charged with two offences
Former Attorney General, Anand Ramlogan, was today charged with misbehaviour in public office and obstruction of justice arising from allegations contained in a report made by David West to the Commissioner of Police, on January 28th, 2015.

Former attorney general Anand Ramlogan was under arrest last night awaiting a decision on his fate this morning.

After 12 hours of questioning following his dawn arrest by police yesterday, Ramlogan remained in custody at Police Headquarters, Port-of-Spain. This in connection with the witness-tampering allegations made against him in 2015 by Police Complaints Authority chairman David West —a probe of which now appears to have reached a head.
END_OF_DOCUMENT_TOKEN_TO_BE_REPLACED

This morning, the Appeal Court ruled that Seepersad should not have granted an interim stay on the collection process but that the substantive matter for judicial review is still on.
END_OF_DOCUMENT_TOKEN_TO_BE_REPLACED

A HIGH COURT judge on Friday granted a stay of implementation and enforcement of the decision by Government that all property owners were required to complete and submit a Valuation Return Form.
END_OF_DOCUMENT_TOKEN_TO_BE_REPLACED 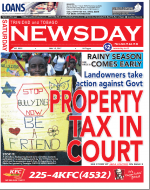 Two of the actions seek to have the courts review the implementation process of the controversial tax while the third is a constitutional challenge to the property tax. In the judicial review and constitutional claims former transport minister Devant Maharaj, United National Congress activist Ravi Balgobin Maharaj and Chaguanas resident Lutchmidat Ramcallie, are asking the Government to hold its hand on the implementation of the Property Tax until it amends the legislative provisions and before the court determines the actions.
END_OF_DOCUMENT_TOKEN_TO_BE_REPLACED

FORMER prime minister and current Opposition Leader Kamla Persad-Bissessar yesterday said the ruling by the Privy Council was a clear vindication of her then government’s decision to repeal the controversial Section 34 of the Administration of Justice (Indictable Offences) Act.
END_OF_DOCUMENT_TOKEN_TO_BE_REPLACED

Former attorney general Anand Ramlogan is remaining tight-lipped about accusations he was profitting from civil lawsuits brought against the State because of flawed legislation passed by the People’s Partnership government.

The accusation was made during the budget debate on Monday by Attorney General Faris Al-Rawi in reference to the Children’s Community Residen­ces, Foster Care and Nurseries Act.
END_OF_DOCUMENT_TOKEN_TO_BE_REPLACED

IN days of old here in Trinidad, people one or two generations ahead of mine used an adage, “when yuh crooked, wet brown paper could cut you”.

The word “crooked” in that context usually meant “a run of bad luck”, although in the instant case of Jack Warner, to whom it now applies, it could be a double-entendre. And if wet brown paper could cut you, then you were really deep in the doo-doo.
END_OF_DOCUMENT_TOKEN_TO_BE_REPLACED

Deputy Director of Public Prosecutions Joan Honore-Paul last night slammed Prime Minister Kamla Persad-Bissessar for her suggestion that she and her colleagues should be cleared in the Emailgate probe, saying the police were far from done with their investigations and the case was still wide open.

She also chastised Persad-Bissessar for releasing contents of reports provided to the police from the US Department of Justice, saying that the treaty under which this information was provided prohibited anyone else other than the national security parties probing the matter to use it.
END_OF_DOCUMENT_TOKEN_TO_BE_REPLACED