How the Taliban Overran the Afghan Army, Built by the U.S. Over 20 Years

KABUL—The Afghan government outpost in Imam Sahib, a district of northern Kunduz province, held out for two months after being surrounded by the Taliban. At first, elite commando units would come once a week on a resupply run. Then, these runs became more scarce, as did the supplies.

“In the last days, there was no food, no water and no weapons,” said trooper Taj Mohammad, 38. Fleeing in one armored personnel carrier and one Ford Ranger, the remaining men finally made a run to the relative safety of the provincial capital, which collapsed weeks later. They left behind another 11 APCs to the Taliban.
END_OF_DOCUMENT_TOKEN_TO_BE_REPLACED

Today is a big day in American politics. In fact, the battle between Hillary Clinton and Donald Trump for the presidency of the most powerful nation on earth has excited probably half the world’s population, who will have monitored the bruising election campaign and who will follow the count tonight until a winner is declared.
END_OF_DOCUMENT_TOKEN_TO_BE_REPLACED

THE EDITOR: I just stay so and remembered something

The 6th of October this year marks the 40th anniversary of one of the worst atrocities that involved this country and so far as I know, justice for that has never properly been served.
END_OF_DOCUMENT_TOKEN_TO_BE_REPLACED

This year’s US presidential election is perhaps the strangest of them all. In 1964, I witnessed my first US election when Barry Goldwater of Arizona challenged President Lyndon Johnson in the aftermath of President John F. Kennedy’s assassination in 1963. As a Southerner, he realized the difficult tasks that faced the nation. His challenge was to insure that black citizens enjoyed the same rights as white citizens which he achieved when Congress passed the Civil Rights Act of 1964 that outlawed discrimination on the basis of race, color or religion. In 1965, he signed the Voting Rights Act that removed the legal barriers that prevented blacks from voting.
END_OF_DOCUMENT_TOKEN_TO_BE_REPLACED

I confess I was surprised when, last Wednesday, announcements from Washington and Havana confirmed that the United States and Cuba had agreed to restore diplomatic relations and work towards the normalisation of other relations, especially trade and travel between the two countries.

I did not think that President Barack Obama had the fortitude to dismantle a 50-plus-year anachronism that lingered as the last vestige of the Cold War that all but ended with the collapse of the Soviet Union in 1991.
END_OF_DOCUMENT_TOKEN_TO_BE_REPLACED

The 24 November 2014 “no indictment for officer Wilson” verdict arrived at by the grand jury in Ferguson, Missouri, in regard to the shooting and killing of the unarmed African-American teenager Michael Brown and the subsequent 3rd December “no indictment” verdict by a grand jury in Staten Island, New York City, in favor of a white police officer in the New York Police Department (NYPD), Daniel Pantaleo, for the “chokehold death” of another unarmed, forty-six year-old African-American man, Eric Garner, speak massive volumes as to the omnipresence of racial tensions/distrust between the Black community and white police officers across the United States.
END_OF_DOCUMENT_TOKEN_TO_BE_REPLACED

END_OF_DOCUMENT_TOKEN_TO_BE_REPLACED

Much like Al-Qaeda, the Islamic State of Iraq and Syria (ISIS) is Made in the USA, an instrument of terror designed to divide and conquer the oil-rich Middle East and to counter Iran’s growing influence in the region. The fact that the United States has a long and torrid history of backing terrorist groups will surprise only those who watch the news and ignore history.
END_OF_DOCUMENT_TOKEN_TO_BE_REPLACED 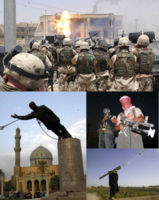 Mayor of Port-of-Spain, Raymond Tim Kee and members of the council will collaborate with the Ministry of National Security, the Trinidad and Tobago Defence Force and the United States Embassy to pay tribute at the historic event. A memorial service will proceed at the All Saints Church at 3.30 pm, immediately followed by an unveiling of the name plaque to be added to Marli Street.
END_OF_DOCUMENT_TOKEN_TO_BE_REPLACED

Within days of the announcement by US authorities that they had intercepted 700-odd pounds of cocaine shipped from Trinidad to Norfolk, Virginia, and the well-publicised arrival here of a number of Drug Enforcement Administration (DEA) agents, I sensed that something had gone awfully wrong.
END_OF_DOCUMENT_TOKEN_TO_BE_REPLACED