Monday’s General Election which, according to preliminary results, has seen the People’s Partnership win 29 of the 41 seats of the House of Representatives and in the process wrest power from the People’s National Movement has paved the way for changes to be made to the country’s Constitution.
END_OF_DOCUMENT_TOKEN_TO_BE_REPLACED

By Carol Matroo and Joanne Briggs
Tuesday, May 25 2010 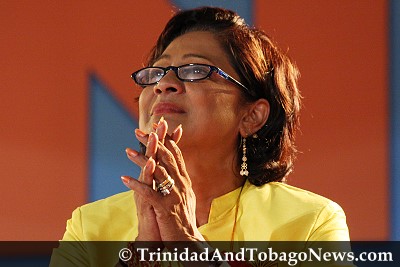 Voters lined up from as early as 5:30 AM at a polling station in Maraval. Here two of the early voters showed off their stained fingers at 6:15 AM.
END_OF_DOCUMENT_TOKEN_TO_BE_REPLACED

How do you think people should vote?
END_OF_DOCUMENT_TOKEN_TO_BE_REPLACED

I AM told by people who have witnessed election campaigns in other Caribbean countries that ours are not unique in their curious blend of the sacred and the profane. I regret not having experiences like theirs so I can make comparisons. I doubt, though, that elections platforms in any other country can rival ours when it comes to hypocrisy, contradictions and shamelessness.
END_OF_DOCUMENT_TOKEN_TO_BE_REPLACED

I am convinced that for the good of the country the present Manning-led PNM administration needs to go. To this end, I agree with the points expressed in this article, Election 2010: An Opportunity for Change.

My view is simple – the present Manning-led government is just too arrogant, dishonest and squandering to be rewarded with another term in office. The corruption under the PNM invokes memories of the infamous John O’Halloran, and in my view, surpasses that of the UNC while they were in office. The Manning-led government has presided over mass squandermania while expecting the public to pay for their excesses through such initiatives as the Property Tax Bill.
END_OF_DOCUMENT_TOKEN_TO_BE_REPLACED

THE EDITOR: I acknowledge that taxes must be paid and sometimes increased in order to maintain and develop the society. Any government could point to all they ‘did for the people’ with our taxes and natural resources dollars, but I am sure if people scrutinize the projects we would find corruption as the underlying reason they bought into many ideas or chose certain companies to work with. Ever so often, a case will get the attention of the wider public.
END_OF_DOCUMENT_TOKEN_TO_BE_REPLACED
THE EDITOR: The following quote was reported in the Trinidad and Tobago Guardian newspaper on 17th May, 2010, and it has been attributed to the prime minister of Trinidad and Tobago:

“Prime Minister Patrick Manning last night conceded that State enterprise Urban Development Corporation of Trinidad and Tobago (UDeCOTT) may have ‘cut corners’ in order to deliver on its mandate. Manning also stated that the governance model with UDeCOTT and other special purpose and state enterprises ‘require improvements.’ He said such companies ‘cut corners all the time,’ but that this was done in order to get around bureaucracy and to meet the demands placed on them.”
END_OF_DOCUMENT_TOKEN_TO_BE_REPLACED

In an interview with Newsday, the head of the local Catholic Church further revealed that Swaratsingh was suspended under Church law after he got married in a civil ceremony.
END_OF_DOCUMENT_TOKEN_TO_BE_REPLACED