THE MOST crucial exercise in any democracy is an election. Therefore, the rules governing the electoral process take on a particular significance. Yet the elections rules, as currently formulated, appear to have crucial gaps which make them arguably inconsistent with the provisions of the Constitution, the Supreme Law.
END_OF_DOCUMENT_TOKEN_TO_BE_REPLACED 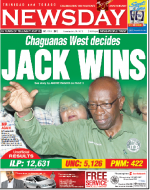 Up until press time, Warner provisionally received 12,631 votes while the United National Congress’s (UNC) Khadijah Ameen, 32 – his nearest rival – received less than half that amount or 5,126 votes.
END_OF_DOCUMENT_TOKEN_TO_BE_REPLACED

RESIDENTS of the polling district of Belle Garden East/Roxborough/ Delaford, which PNM candidate Hilton Sandy hopes to win in the Tobago House of Assembly elections come January 21, appear to be split right down the middle over the question of whether his chances in the election have been hurt because of his controversial “Calcutta ship” remarks.
END_OF_DOCUMENT_TOKEN_TO_BE_REPLACED

THE ARGUMENTS over the last two weeks over the Government’s request to use media air- time for its own programmes have been going around in public circles without reference to what exactly is said in licences granted to media houses under the Telecommunications Act 2001.
END_OF_DOCUMENT_TOKEN_TO_BE_REPLACED

I am not a lawyer, I know nothing about legalese, but I do know when shit stinks and barely literate politicians tell me that I needn’t worry because they have the nation’s best interest at heart. Do I really have to believe the AG when he says that in making his decision about Ish and Steve that his only concern is that justice is served? Ah mean, is it that I have become so bey bey that I don’t know when someone is pissing on me even as he insists that it’s raining bucket ah drop. Ok, I stole this phrase from the title of Judge Judy’s book which reads “Don’t Pee on My Leg and Tell Me It’s Raining” but the intent is the same: stop all this legal chicanery and respect the public’s point of view.
END_OF_DOCUMENT_TOKEN_TO_BE_REPLACED

MERE days after the United States expressed disappointment over the outcome of failed extradition proceedings against businessmen Ishwar Galbaransingh and Steve Ferguson potential hurdles have emerged.

The Office of the Director of Public Prosecutions is finding the situation very challenging in mounting renewed proceedings against the men in the local courts.
END_OF_DOCUMENT_TOKEN_TO_BE_REPLACED

In an interview with Newsday, the head of the local Catholic Church further revealed that Swaratsingh was suspended under Church law after he got married in a civil ceremony.
END_OF_DOCUMENT_TOKEN_TO_BE_REPLACED

A LARGE section of the top floor of the West Wing of the President’s House in St Ann’s, directly above the visitor’s entrance, came crashing down on Saturday morning owing to the dilapidated nature of the Official Residence of the country’s Head of State/Commander in Chief.
END_OF_DOCUMENT_TOKEN_TO_BE_REPLACED

WE ARE ALL familiar with the rough details of the incident involving 81-year-old pensioner Percy Villafana and Prime Minister Patrick Manning. But have people really analysed the significance of this incident properly?
END_OF_DOCUMENT_TOKEN_TO_BE_REPLACED

The Telecommunications Authority of T&T (TATT) has been served with a legal letter by the United National Congress (UNC), claiming that the Government is abusing its authority for this election period. In a letter dated May 15, 2010, Om Lalla stated that his client, the UNC, entered into contractual arrangements with various television and radio companies to purchase broadcast airtime. However, Lalla stated the Government had demanded the same air time for which the UNC had already entered an agreement. Those days include May 16 (today), May 17 and May 23. The letter stated that failing to hear from the authority would result in the UNC seeking redress in the High Court without notice.
END_OF_DOCUMENT_TOKEN_TO_BE_REPLACED