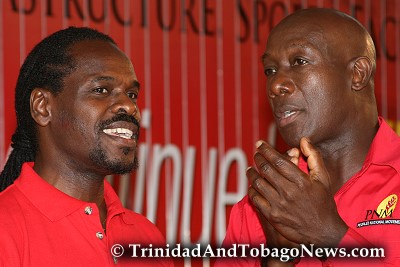 Party insiders accuse political leader and Prime Minister Patrick Manning of attempting to remake both the party and the system of government to perpetuate his own brand of leadership. They contend that the Manning-conducted purge of the new PNM old guard has more to do with a perceived lack of loyalty to the leader than to any popularity contest.

There are claims too of a failed Manning attempt to attack, by proxy, his main political rival in the PNM and MP for Diego Martin West, Dr Keith Rowley. Insiders believe that Manning was part of a conspiracy to take Rowley out on the Landate affair.
END_OF_DOCUMENT_TOKEN_TO_BE_REPLACED

Viewed as a draconian policy by staff, the company’s demand that flight attendants submit to the rectal procedure is just one in a series of developments that have contributed to flagging employee morale.
END_OF_DOCUMENT_TOKEN_TO_BE_REPLACED

Money, even politicians will tell you, is the root of all evil. After all, ever since this country’s coffers were boosted by oil dollars back in the 1950s, many an elected member has been accused of stealing from the public purse. When Dr. Eric Williams came on the electoral scene in 1956, one charge he used to crush the burly “Bertie” Gomes with was corruption. Shortly after he was put in charge of the Treasury, Williams would himself be accused of corruption. Or, more accurately, that he harboured corrupt ministers and underlings.
END_OF_DOCUMENT_TOKEN_TO_BE_REPLACED