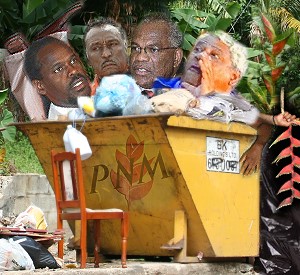 Valley accuses Manning of bias
Diego Martin Central MP Ken Valley, in a strongly-worded letter to his political leader Prime Minister Patrick Manning, has called on the PM to accept his endorsement by PNM’s screening committee and stop imposing his bias against his selection as the party’s candidate for the seat in the November 5 general election…

Last rites for Valley
PM sticks to his guns

‘I leave in grace, not disgrace’
Outgoing Laventille East/ Morvant MP Fitzgerald Hinds comforted tearful supporters whom he urged to stay loyal to the PNM despite his non-selection to contest the seat in the upcoming General Election.