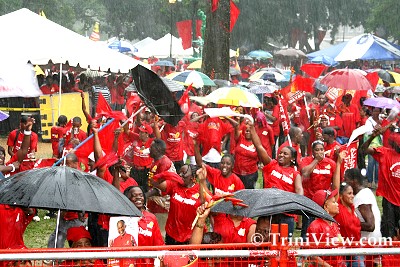 Balisier closes ranks
PRIME Minister Patrick Manning was surely heartened by the huge turnout of supporters at the PNM’s presentation of candidates yesterday.
Manning’s speech, although it included some moments of passion, did not really excite the crowd. Even several verbal cues he tried to give to the crowd to cheer, such as saying that by his political rivals’ calculations the PNM crowd should number 150,000 people — did not work. Several times the crowd simply did not take up the opportunity he offered them to cheer for the particular point he was making. Even his hilarious attack on a theoretician with fuzzy ideas who would duck and run, failed to elicit the expected raucous laughs of PNMites, or even from his party officers and candidates onstage. “You need steady hands at the helm,” was an assertion that party members should have loudly cheered but was met with dead silence.
END_OF_DOCUMENT_TOKEN_TO_BE_REPLACED