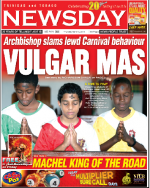 ARCHBISHOP of Port-of-Spain Joseph Harris yesterday attacked the lascivious behaviour of some masqueraders in the just concluded Carnival Season, conduct which the leader of the Roman Catholic faithful in this country described as symptomatic of the pervasive lawlessness in society.

In a forthright, sobering Ash Wednesday homily at Our Lady of Perpetual Help RC Church, Harris Promenade in San Fernando yesterday, Fr Harris also observed that all aspects of national life, including that of giving to the poor and indigent, must change if the Carnival-type mentality is to be transformed.
END_OF_DOCUMENT_TOKEN_TO_BE_REPLACED

Among the celebrities who have been invited to this year’s Carnival, one man stands head and shoulders above the lot, quite literally, I need add. I refer to Jamaica’s star sprinter, Usain Bolt, who flew into the country almost unannounced, courtesy one of his corporate sponsors.
END_OF_DOCUMENT_TOKEN_TO_BE_REPLACED

Two or three Carnivals ago, when Pan Trinbago introduced an exclusive party zone to the people’s Panorama, I protested, warning that the organisation that was supposed to protect and promote pan was instead disrespecting pannists and the national instrument.
END_OF_DOCUMENT_TOKEN_TO_BE_REPLACED

I had planned to make my first contribution for 2013 to be on the series of important film documentaries on Trinidad Carnival put on by the TT Film Festival, not least of which were the two on Minshall and the presentation given by Ray Funk. Some were poorly attended but they were all priceless in the way each of them opened a little more of that portal on ourselves more of us need to see. Minsh used the streets as his canvass to express his philosophy in the traditions of Bailey, Saldenah and the legions of largely (tragically) nameless persons who used the Midnight Robber, the Minstrel, the Baby Doll, the Dame Lorraine, the Burrokeet, the Jab Molassie to hold up the mirror of society and all its hypocrisy and excesses to show us what many of us really are. That aspect of our Mas, the use of the open space as a gigantic participatory (before the advent of security, ropes and the word “exclusive”) political and social theatre, is perhaps the most important message that needs to be kept firmly in the minds of those who wish to take over the Mas – specifically those who have reduced it to empty, expressionless displays of bikinis, bras and feathers as if here is Las Vegas.
END_OF_DOCUMENT_TOKEN_TO_BE_REPLACED

Everyone has the rights to Carnival except the people. Pan Trinbago cuts off our Panorama semi-finals; a newly formed, unknown copyright organisation warns revellers not to post pictures of themselves or their friends online; the NCBA and the government station wrangle over the streaming of the Parade of the Bands. It’s as if the copyright pendulum has swung completely in the opposite direction with copyright now intersecting with and infringing on people’s basic rights.
END_OF_DOCUMENT_TOKEN_TO_BE_REPLACED

WHATEVER our differing views on Carnival, one thing we can agree on is the heights of happiness that the festival engenders at all levels of the society. There is hardly a sourpuss left scowling as the music, the visuals and the spirit take possession of our beings, commanding us to listen, to look, to sing along, to dance and, most of all, to laugh and be happy.
END_OF_DOCUMENT_TOKEN_TO_BE_REPLACED

NOTHING that I wrote last Sunday should be misread as the lament of an “ole geezer” who has had his Carnival day and who now wants to deny others the joy of the festival. Quite unlike some “sourpusses” who see nothing good in Carnival, I believe ours is a unique mix of music, artistry, colour, spontaneity, high-energy, sexuality, conviviality and more, much more. So, as this year’s festival comes to a climax over the next two days, I encourage Trinis-to-de-bone and our foreign guests to “play mas”. Have a whale of a time, but be safe.
END_OF_DOCUMENT_TOKEN_TO_BE_REPLACED

On Wednesday I went to MovieTowne in Port of Spain for the first time ever (no, seriously). Now before the last seven friends I have left in this world get vex with me, rest assured I haven’t had a change of heart and decided to be like everyone else. It was only because that was where the documentary “Fire in Babylon” was being shown and allyuh know how strongly I feel about cricket and social consciousness. So yuh boy gone and took in the thing (and again on Sunday to see the documentary on the Black Power Movement “70s the Movie”).
END_OF_DOCUMENT_TOKEN_TO_BE_REPLACED

BIG QUAKE
TOKYO: A ferocious tsunami unleashed by Japan’s biggest recorded 8.9 earthquake slammed into its eastern coast yesterday, killing hundreds of people as it carried away ships, cars and homes, and triggered widespread fires that burned out of control.
END_OF_DOCUMENT_TOKEN_TO_BE_REPLACED

Oh what a difference an election victory makes. For time immemorial we were told by some that the steelband could never be considered as the national instrument—there was always the dholak—and that carnival was not really the national festival. They always sought to convince us that devali was comparable to carnival and emblematic of the national consciousness; hence the need to promote devali in the same way in which carnival is promoted. Somehow carnival was too black.
END_OF_DOCUMENT_TOKEN_TO_BE_REPLACED