THE CAMERA of an automatic teller machine has caught three cops playing robbers.

Three police officers attached to the Tunapuna Police Station are now set to be charged with the robbery of a businessman and will face a Tunapuna magistrate following the completion of identification parades tomorrow.
END_OF_DOCUMENT_TOKEN_TO_BE_REPLACED 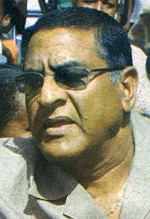 The officer had reported the incident to the US Embassy, which later took the allegations to the Sangre Grande Police Station.
END_OF_DOCUMENT_TOKEN_TO_BE_REPLACED