South Africa has come face to face with its apartheid past when a “shocking” video emerged of white university students force-feeding and racially humiliating five poor black cleaners.

The four students are heard referring to the old “Boer” college way of life during the footage, which saw the elderly workers being made to drink bottles of beer, run races, play rugby and then kneel and eat meat which had been urinated upon.
END_OF_DOCUMENT_TOKEN_TO_BE_REPLACED

Millions around the world are facing a future of insecurity, starvation and malnutrition as the price of basic food soars. The price of maize, wheat, soya beans and rice – staples for the majority of the world’s population – have more than doubled in the last few years.
END_OF_DOCUMENT_TOKEN_TO_BE_REPLACED

EDITOR: It has long been known, that our greatest resources have been given to big business or prominent men from all over the world, especially the United States. However, this didn’t hit home until I was looking up Oil Fields to see who own them. And, under the United States I found Tobago listed as “In Development.” It is amazing to see and hear of corrupt people at home, but I am disgusted by these people and can’t hold back any longer. Our natural resources belong to the people of Trinidad and Tobago, and not to outsiders. Why should the people of Trinidad & Tobago get the smaller percentage?
END_OF_DOCUMENT_TOKEN_TO_BE_REPLACED

ABOUT two weeks ago, a downright dangerous incident occurred offshore Claxton Bay, not far from where I live. Peter Vine, a UWI lecturer and environmental activist, was among a group of fishermen and nearby residents, protesting preliminary works being conducted by agents of the NEC in preparation for the reclamation of some 255 hectares of coastal land for the establishment of an industrial port.
END_OF_DOCUMENT_TOKEN_TO_BE_REPLACED

There is a frightening scene at the end of Emmanuel Appadocca, the first novel written by a Trinidadian in 1854 in which Emmanuel Appadocca, the major protagonist and son James Willmington, an English sugar planter, breaks into his father’s home in St Ann’s, seizes him and condemns him to death for abandoning him while he was a child. In this novel, author Maxwell Philip, examines the implications of the lex talionis–or the law of just revenge–and seeks to understand how it should be applied in the particular circumstance.
END_OF_DOCUMENT_TOKEN_TO_BE_REPLACED 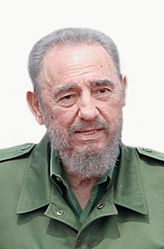 Revered maximum leader Fidel Castro has decided to demit office as President and Commander-in-Chief of Communist Cuba due to ill health.

While the Bush Administration in the United States is euphoric to see Castro finally off the anti-America radar screen, the geo-political achievements/milestones of Comrade Fidel Castro “can’t be wiped away so easily” nor be down-graded.

Fidel Castro came to power in Cuba through armed revolution. He overthrew the pro-United States dictatorship of Fulgencio Batista on 1st January 1959. President Castro then proceeded to take the riches from the rich and give them to the poorest of the poor. The descendants of those rich, capitalist Cubans, now reside in Miami, U.S.A. They still harbor supreme acerbic anti-Castro sentiments.
END_OF_DOCUMENT_TOKEN_TO_BE_REPLACED

Robert Beckford visits Ghana to investigate the hidden costs of rice, chocolate and gold and why, 50 years after independence, a country so rich in natural resources is one of the poorest in the world. He discovers child labourers farming cocoa instead of attending school and asks if the activities of multinationals, the World Bank and International Monetary Fund have actually made the country’s problems worse.

In the build up to Wednesday’s meeting with newly elected PM Thompson of Barbados, PM Manning must be briefed comprehensively and clinically on the problems and issues that contributed to the deterioration of T&T/Barbados bilateral relations during the regime of former Prime Minister Owen Arthur. He must work assiduously to pre-empt similar mistakes from recurring during the Thompson watch and to frame the development of our future relations in a mutually beneficial manner.
END_OF_DOCUMENT_TOKEN_TO_BE_REPLACED

LAST week, in another curious twist to Government’s off-and-on position on the $2 billion annual fuels subsidy, Minister in the Ministry of Finance, Mariano Browne, confirmed that it’s up for review. He gave no time-line for the exercise nor did he hint at the percentage being considered. These, I presume, will come after discussion and hopefully careful consideration of the implications, more so the impact on inflation.
END_OF_DOCUMENT_TOKEN_TO_BE_REPLACED