THE EDITOR: There is a saying that you can fool some of the people some of the time, but you can’t fool all the people all the time. This was clearly demonstrated over the last few weeks by Finance Minister’s Karen Nunez-Tesheira, Mariano Browne and Energy Minister Conrad Enill.
END_OF_DOCUMENT_TOKEN_TO_BE_REPLACED

One of the hidden, unnoticed and unsung variables in the recently concluded United States Presidential elections was the Bob Marley effect in Senator Barack Obama’s run for the United States presidency and his awesome victory.

…as hard as it is to accept a black president, it’s even harder to accept a black first lady. First Lady has always held a beloved sentimental mother/wife of the nation symbolism. Conservatives are not ready to have to look at this very BLACK woman with her degrees and her fierceness and see her as the epitome of the American mother/wife.
END_OF_DOCUMENT_TOKEN_TO_BE_REPLACED

TWO Trinidadians and four Venezuelans were yesterday sentenced to life imprisonment for trafficking cocaine in what the trial judge said was the “largest amount to ever pass through the courts of Trinidad and Tobago.”

Justice Alice Yorke-Soo Hon, presiding in the Port-of-Spain Third Criminal Court, took her time, more than an hour, as she sent the six guilty people to serve lengthy prison sentences for trafficking 1,749 kilos of cocaine at Monos Island on August 23, 2005.
Full Article : guardian.co.tt

In a televised address to the nation, the Prime Minister disclosed talks have begun with the Elections and Boundaries Commission (EBC) to “identify new boundaries for local government” ahead of the local government election which will be held “later this year” .
END_OF_DOCUMENT_TOKEN_TO_BE_REPLACED

The spokesmen for the government on the Bombardier jet deal have been trying to convince us that the deal was aborted because of government’s insistence on a strict anti-corruption clause, and not because of widespread public outrage.

Guess what? I am prepared to give them the benefit of the doubt on this. It certainly shows them in a worse light. Instead of being guided by the concerns of the population, they have stubbornly taken the position that they are not.
END_OF_DOCUMENT_TOKEN_TO_BE_REPLACED 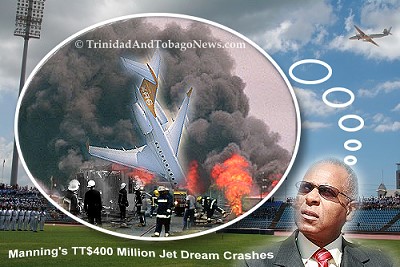 A ploy that did not fly

Caribbean Airlines (CAL) will want the citizenry to believe that its decision to stall the plan to acquire an executive jet was based on the high principle of being determined not to go ahead with the transaction unless the contract included a watertight or, perhaps, more accurately in the context, an airtight anti-corruption clause.
END_OF_DOCUMENT_TOKEN_TO_BE_REPLACED

Patrick Manning and Caribbean Airlines have been facing widespread public outcry over their attempt to purchase a $400 million luxury jet from Bombardier for the government’s official use. Minister of Works Colm Imbert, Minister of Finance Mariano Browne, and Caribbean Airlines’ chairman Arthur Lok Jack have been the main defenders and spokespeople for the government on this issue.
END_OF_DOCUMENT_TOKEN_TO_BE_REPLACED

THE EDITOR: I’d like you to allow me a small space on your website to address one of the many elephants that occupy this large room that we call Trinidad and Tobago. With all the recent talk about the high cost of living I think that this would be a most appropriate time to do so.

I recently read a short article in the Trinidad Express about the high cost of house and apartment rentals in Trinidad and Tobago today. In the article, a number of landlords defended their exorbitant prices saying that the costs of building materials have gone up and therefore to cover these costs, they have upped their prices. Fair enough, right?
END_OF_DOCUMENT_TOKEN_TO_BE_REPLACED

AS I listened to billionaire-businessman Arthur Lok Jack reel out the numbers surrounding Caribbean Airlines (CAL) decision to purchase a Bombardier Global Express SRX, I was puzzled. If anyone knows anything about basic “counting”, it should be a billionaire. If anyone knows about price-gouging, it’s invariably the very wealthy. After all, that’s how most among the super-rich become wealthy. At his media conference last week, Lok Jack reeled out some numbers that stunned me.
END_OF_DOCUMENT_TOKEN_TO_BE_REPLACED