In the build up to Wednesday’s meeting with newly elected PM Thompson of Barbados, PM Manning must be briefed comprehensively and clinically on the problems and issues that contributed to the deterioration of T&T/Barbados bilateral relations during the regime of former Prime Minister Owen Arthur. He must work assiduously to pre-empt similar mistakes from recurring during the Thompson watch and to frame the development of our future relations in a mutually beneficial manner.

This first meeting must give priority to the conduct of our bilateral interface. They must leave our multilateral Caricom relations to be dealt with at future meetings of the Heads of Government caucus. PM Manning must not allow PM Thompson an exclusive berth to carve the contours of the subjects for discussions because this will rightfully be regarded as weakness.

Foremost on the list of issues, the Attorney General must provide PM Manning with an honest and accurate assessment of the adverse effects on T&T resulting from the 2006 Tribunal Judgment that established the maritime boundary between these two Caricom states and deprived us of exploiting at least 9,000 square nautical miles of resource-yielding ocean space.

PM Manning must be also briefed to inform new PM Thompson that the current fish supply to the local market has been decimated owing to intensified hydrocarbon exploration, exploitation and industrialisation. Consequently T&T will become even more dependent on our over-exploited and limited flying fish resources off Tobago for supplying our nutritional needs. That the reducing fish supply/high prices and over-exploitation problems have fundamentally restricted the elasticity of our negotiating space. Accordingly the question of Bajan fishermen being accorded access to our flying fish grounds must be placed on the back-burner for the time being in order to respect Tobagonian sensitivities.

I do hope that the technocrats from the AG Office/Foreign Affairs will inform PM Manning that the 2004 Arbitral Tribunal had absolutely no locus standi to issue any mandatory pronouncements on the right, historical or otherwise of the Bajan fishermen to resume fishing in our waters. Whatever pronouncements The Tribunal issued on the bilateral fishing issue were null and void, of persuasive value and of no effect. They should be ignored. 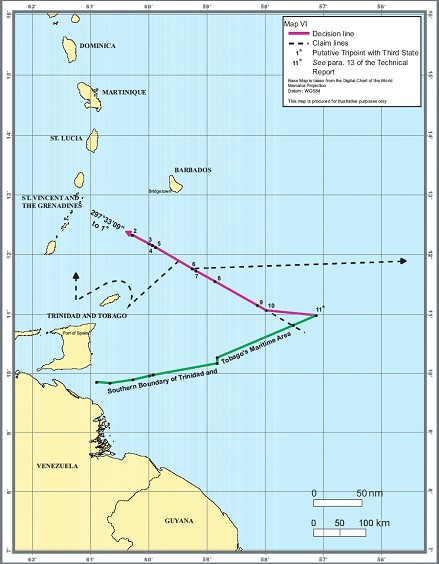 Marine area between Trinidad and Tobago and Barbados

Additionally PM Manning must diplomatically apprise his Bajan counterpart that Trinbagonians did not take kindly to Barbados’ attempt to appropriate all the marine areas including oil platforms situated beyond 12 miles off north Tobago before the Tribunal; that the wounds inflicted by the contaminated Judgment are still too fresh in our psyche for T&T to accommodate any movement in favour of the fishermen of Barbados.

The prospects for collaboration between both countries to increase local food production must be explored. PM Thompson made the achievement of greater self-sufficiency of cheap food supply for Bajans his main election platform issue. T&T has enormous arable land, climate and human resource potential to contribute to the reduction of the extra-regional Bajan import food bill.

Both Prime Ministers must propose an action plan to achieve this objective of supplying agro-based inputs into the hotel industry of Barbados. PM Manning should have consulted food crop farmers including Mr. Deonarine of the Food Crop Farmers Association who traditionally sell on the Bajan market to reduce the exporting bureaucracy and transport woes resulting from the closure of BWIA.

Rationalisation of air transport must figure prominently in the bilateral discussions as a quid pro for treating with Thompson’s agenda for improving and expanding maritime transport within Caricom. Grantley Adams Airport is increasingly emerging as the hub of Caribbean air transport to Latin America and European tourist arrivals and will relegate Piarco/Crown Point to our detriment. The contribution of T&T’s former BWIA and current Caribbean Airlines to the development of the Bajan tourist industry over the years must be succinctly put across to the Bajan Prime Minister.

The achievement of some measure of increasing synergy between our Carnival and the Bajan Crop Over Festival to the benefit of our mas designers and soca artistes to balance off the Bajan invasion in T&T must be initiated. T&T schools must be exposed to greater inter-face with Bajan schools in the fields of cricket, football and competitive athletics to draw both countries together.

The questions of the Caricom energy security agenda and collaboration with Barbados to stem the growing tide of Chavez’s Petro Caribe deferred oil payment scheme that threaten the cohesiveness of the integration movement must be given urgent and detailed priority. The case of the building of the proposed T&T Eastern Caribbean Gas Pipeline that will firstly benefit Barbados with a reliable energy supply is instructive in this regard.

I earnestly hope that PM Manning and his advisers have consulted with the TTMA, Chambers of Commerce and our commercial conglomerates that acquired recent interests in Barbados economy to contribute to the bases for meaningful and fruitful discussions.

Manning may wish to shelve his political integration proposal with, inter alia, Barbados having regard to PM Thompson’s assumption of the Heads of Gov’t responsibility for the CSME.

The main thrust of this first meeting must be to lay a new solid platform for launching mutually beneficial functional co-operation. We must build new bridges for the normalisation of our bilateral relations after it nose-dived against T&T in the fourteen-year, pre-Thompson era. That rapprochement can only be achieved by careful tilling of the ground for this first diplomatic interface. There must be clear identification of our socio-economic priorities and interests and the bilateral strategies to be pursued in co-operation with both private sectors for their fruition.