When has Western society ever taken moral precedence over the dollar? All the examples chronicled in our recent and ancient history indicate that the answer is a resounding “never.” It is therefore safe to say that the decision to ban the slave trade in 1807 was not about those in authority taking moral and legal responsibility for an injustice but, as historical evidence has proven, was a decision based on the economics of the time.
END_OF_DOCUMENT_TOKEN_TO_BE_REPLACED

On 1st January, 1863, President Abraham Lincoln signed the Emancipation Proclamation thereby freeing slaves in those states that had rebelled against the federal government. Afrikan slaves were not freed in states that were still under federal control. Subsequently, on 18 December, 1865, the 13th amendment to the constitution freed all slaves in the United States.
END_OF_DOCUMENT_TOKEN_TO_BE_REPLACED

“Notwithstanding all that, there remains quite an amount to be thankful for, fundamentally, as New World societies, even civilisations, have been formed out of the slave trade.”

This is what Harry Mungalsingh, speaking in the Senate, said:

“As far as I know, 83 percent of the prison population come from specific communities which predicates the need for a strong and distinct national development plan accepted by the entire society for these specific 16 communities and you know what communities they are. Such a plan must include the churches. A change in abortion laws, strong family planning service with cash incentives for voluntary sterilisation re-education.”

I have repeated what Harry Mungalsingh said in the light of some comments which attempt to turn this into a pro-abortion debate. Crucial to this pro-abortion position is that perhaps Harry Mungalsingh was unwise to say this, but after all no big t’ing since sterilisation is voluntary.
END_OF_DOCUMENT_TOKEN_TO_BE_REPLACED

Former Prime Minister Basdeo Panday’s conviction and sentence have been squashed. The Court of Appeal this afternoon ordered a new trial at the Magistrate’s Court before a different Magistrate. Mr. Panday was sentenced to two years in jail and fined by Chief Magistrate Sherman McNicolls after being found guilty of not declaring a Million Dollar London bank account to the Integrity Commission.
END_OF_DOCUMENT_TOKEN_TO_BE_REPLACED

It happened one day, sometime in the mid-1970s, not long after I had emerged from prison for my role in the 1970 mutiny. Because of the political nature of my crime, I knew there were tens of thousands of mainly PNM diehards who were bitter, even hostile towards me. But I refused to be intimidated by them.

At age 28 or thereabouts, I strutted around the country with a proverbial “log” on my shoulder (no chip for me!), defiance etched on my face, and as sharp a tongue as one could find. In fact, I saw myself as being “badder than de baddest”, ready to take on anyone, as many PNMites of that era would testify, having been on the receiving end of my barbs or colourful barrages.
END_OF_DOCUMENT_TOKEN_TO_BE_REPLACED 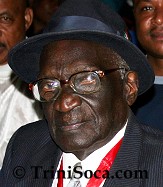 The Copyright Music Organisation of Trinidad and Tobago (COTT) was thrown into mourning yesterday afternoon, as news of the death of calypso composer, the Mighty Terror, swirled through the local music community.

The purpose of this article is to examine the evolution of Freemasonry, its purpose, education process and communal way of life.

At the outset, one cannot talk about the origin of Freemasonry; the discussion must focus on the evolution of this system and the unique, original ancient Afrikan/ Kemetic/ Egyptian way of life.

The word “free” means “without hinderance”; the word “mason” refers to “one who builds, a bricklayer.” As such, Freemasonry is that system, craft or art of building, not a physical building but building spiritual, an edifice within the human being. The ancient Kemites/Afrikans/Egyptians refer to this spiritual concept as the “Temple in Man.”
END_OF_DOCUMENT_TOKEN_TO_BE_REPLACED

One cannot help but look on with disbelief at the meanderings in the matter involving the State and Chief Justice Sat Sharma. Last Monday, this messy affair that has staggered like the proverbial drunk, from Sharma’s home to the Magistrates’ Courts, from midnight hearings in a judge’s chambers to the hallowed halls of the Privy Council, finally collapsed in the drain of the magistracy. And the person who helped take it there, however plausible his explanations may be, was Chief Magistrate Sherman McNicolls.
END_OF_DOCUMENT_TOKEN_TO_BE_REPLACED

First let me offer on behalf of all patriotic cricket lovers congratulations to Darren Ganga and his Soca Chutney Cricketers for once again running away with the Carib Regional and KFC One day Championships. The Team presents the PNM Government with another opportunity to allow it to compensate and make it up to this team for the shabby treatment that meted it to them for an outstanding similar achievement in 2006. Government awarded the pittance of $1million to sixteen cricketers and technical officials while doling out over $35m alone in prize money to the Soca Warriors losers.
END_OF_DOCUMENT_TOKEN_TO_BE_REPLACED