On January 29, 2011 after the People’s Partnership government was elected, I participated in a conference on multiculturalism that was sponsored by the Global Organization of People of Indian Origin (GOPIO) Trinidad and Tobago. Kamla and Sat were thick as thieves then and Kamla’s government decided that multiculturalism would be T&T’s cultural policy.
END_OF_DOCUMENT_TOKEN_TO_BE_REPLACED

It was Indian Arrival Day. I just had to go down to Paravati Girls Hindu College, Debe, to hear what Sat Maharaj, leader of the Sanatan Dharma Maha Sabha (SDMS) had to say about the importance of Indian Arrival Day to his community and his response to the negative media coverage that attended his demand that Nafisah Nakhid not wear her hijab at his Maha Sabha School, which he said violated the school’s dress code.
END_OF_DOCUMENT_TOKEN_TO_BE_REPLACED

NEARLY two hundred years after they became part of the building of Trinidad and Tobago, people of East Indian descent are still considered second class citizens, the president of the local chapter of the Global Organisation of Indian People (GOPIO), Karran Nancoo, has said.
END_OF_DOCUMENT_TOKEN_TO_BE_REPLACED

That was the “message” Secretary General of the Sanatan Dharma Maha Sabha (SDMS) Satnarayan ‘Sat’ Maharaj sent publicly for Roman Catholic Archbishop Joseph Harris in light of the controversial debate on child marriage and the law.

“Mr Archbishop and all you other people, look at the mote in your own eye before you point out the mote in the eye of the Hindu.
END_OF_DOCUMENT_TOKEN_TO_BE_REPLACED

HINDUS across the country yesterday observed the religious event of Kartik with many going to the beach or river to hold pujas (prayers) and pray.

All Sanatan Dharma Maha Sabha (SDMS) run schools were closed to allow for entire families to pray together. Kartik Snaan is the name given for the months of October/November in the Hindu calendar. During this holy time Nav Ratri, Divali and Ramleela are observed and celebrated.
END_OF_DOCUMENT_TOKEN_TO_BE_REPLACED

I regard myself as an objective and detached observer of the legitimate current claim being prosecuted across the Caribbean for European nations that participated in the infamous Trans-Atlantic Slave Trade to pay reparations to the descendants of those who suffered this inhumanity in the hands of the slave-masters/traders and tribal chiefs in Africa who mobilized them and sold them to the slave-traders.
END_OF_DOCUMENT_TOKEN_TO_BE_REPLACED

PM must say if she agrees

Former head of the public service, Reginald Dumas, is taking issue with a claim by the secretary general of the Sanatan Dharma Maha Sabha, Satnarayan Maharaj, that generations of People’s National Movement (PNM) supporters were planted in the public service to prevent any non-PNM government from getting a second term. Maharaj made the claim during an Indian Arrival Day function hosted by the Maha Sabha in Debe on Friday.
END_OF_DOCUMENT_TOKEN_TO_BE_REPLACED

I endorse Sat Maharaj’s offer of grants of “about $100,000 to local historians who wish to document ‘authentic’ East Indian history in the communities” (Express, May 25). Although I don’t know what Sat means by “authentic” history or what constitutes misrepresented histories “by the children of converts,” I still think his thrust is correct. We need to pay greater attention to our past so that we can better understand our present.
END_OF_DOCUMENT_TOKEN_TO_BE_REPLACED

The close to 200 million voters who propelled the controversial Bharatiya Janata Party (BJP) to power comprise in the main Hindu nationalists who see the country as Hindu first, anything else afterwards. But they were not the decisive elements that drove the Indian National Congress and the Nehru-Gandhi dynasty out of power in a humiliating rout.
END_OF_DOCUMENT_TOKEN_TO_BE_REPLACED 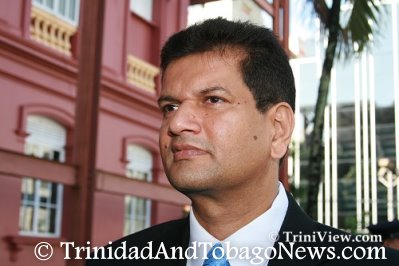 Tourism Minister Chandresh Sharma is under investigation by the police for the assault of his former girlfriend. Sacha Singh, the managing director of AMS Biotech Security Concept and AmSure T&T Ltd, who is in her late 20s, met with officers of the St Joseph Police Station on Friday at her Piarco business and gave a statement of Sharma’s alleged physical abuse during an altercation on March 12 at Grand Bazaar. Though a police investigation into such a matter can take as long as six months, the Sunday Guardian learnt that because of the high-profile nature of the matter it is being fast-tracked. ASP Joanne Archie, public information officer of the T&T Police Service, yesterday confirmed that an investigation was being conducted by the police against Sharma: “Statements were recorded and the investigation is in progress.”
END_OF_DOCUMENT_TOKEN_TO_BE_REPLACED