From the article below (the bottom of the first page and continuing onto the second page), it appears that Machel Montano did perform at the “Nine Mile Music Festival 2013” which was held in Florida, Miami on March 02, 2013. There were concerns that his U.S. visa would have been revoked following his conviction last year for assaulting four persons in 2007 outside Zen night club in Port-of-Spain and for using obscene language. Montano was fined on February 25, 2013.
END_OF_DOCUMENT_TOKEN_TO_BE_REPLACED

HAVING been convicted last year of assaulting four persons outside a Port-of-Spain nightclub in 2007 and for using obscene language, soca superstar Machel Montano got a virtual “slap on the wrist” when he was fined $13,700.
END_OF_DOCUMENT_TOKEN_TO_BE_REPLACED 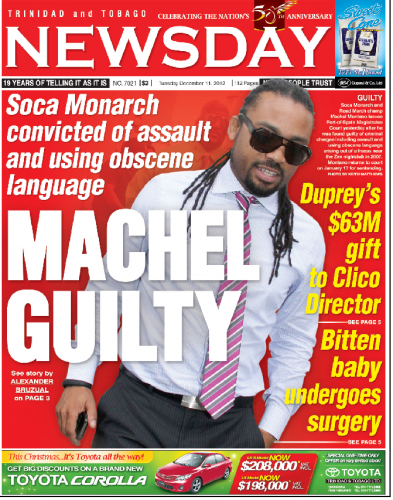 Montano, the reigning Power Soca Monarch and Road March king, along with Kernel Roberts, the son of legendary Calypso icon Lord Kitchener, Joel “Zan” Feveck, a member of Montano HD Family, and Rodney “Benjai” LeBlanc, best known for his patriotic song, Trini, were all charged with a series of criminal offences arising out a fracas outside the Zen nightclub, in Port of Spain in April 2007.
END_OF_DOCUMENT_TOKEN_TO_BE_REPLACED

ON Ash Wednesday, two articles in the Express perked me up. In the first, Planning and Development Minister Dr Bhoe Tewarie, interviewed in the Grand Stand, told reporter Anna Ramdass that soca star Machel Montano “should be leading the charge in selling Trinidad and Tobago internationally”. Vowing to pursue this quest at Cabinet level, Dr Tewarie added, “…I think Machel is in a class by himself… we should try to support an external thrust led by Machel in the world outside…”
END_OF_DOCUMENT_TOKEN_TO_BE_REPLACED