I suppose I can say publicly what Selwyn Ryan (See Express, December 23) can say privately and obliquely when he speaks about the specter of the non-representation of twenty five percent of the population and the impending disenfranchisement of Africans in the political process that is likely to happen here eventually if we do not attend to this situation. Forbes Burnham and the PNC ruled Guyana by fair means and foul although they were fewer in numbers than the PPP until the PPP booted them out never to see power again in the foreseeable future.
END_OF_DOCUMENT_TOKEN_TO_BE_REPLACED

The print media has a critical role to play in hosting the political and institutional memory of T&T that is noted for its traditional forgetfulness. The media must also serve as an archive documenting political position and conduct to deter politicians from manipulating us conveniently at their whims and fancies.
END_OF_DOCUMENT_TOKEN_TO_BE_REPLACED

One of the most disgraceful, disgusting, shameless and tasteless spectacles on TnT’s political landscape was the puerile behavior by putative mature, adult, elected and non-elected UNC-A parliamentarians at the recent opening of Parliament on 17 December, 2007.

If that was the public behavior of educated adults then it need occasion no great surprise that the uneducated, immature young people in TnT behave in a similar disrespectful fashion: “Monkey see, monkey do.”
END_OF_DOCUMENT_TOKEN_TO_BE_REPLACED

I was caught between completing my year-end review for the Business Express and watching television where a miracle of sorts-team West Indies actually flogging South Africa’s bowlers, Chanders edging his way to another century-was taking place, when the telephone rang. “Are you tuned in to BBC?” asked my friend of umpteen years, Mike Bazie. “No,” I replied, telling him about our team’s performance. “They just killed Bhutto! Switch channels. It’s coming across live.” He didn’t have to say which Bhutto, or tell me how she was killed. “Hey,” I told Mike, “I must watch this cricket it’s enthralling we need to make 400-plus runs. I’ll check Bhutto in a while.”
END_OF_DOCUMENT_TOKEN_TO_BE_REPLACED 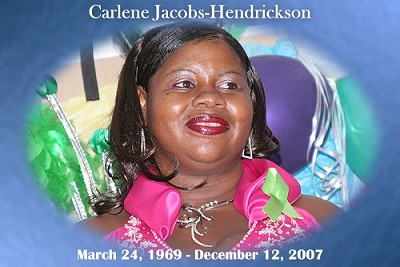 The funeral for Carlene Jacobs-Hendrickson took place on Thursday 27th December, 2007, at the Cathedral of the Immaculate Conception on Independence Square, Port of Spain. Carlene was the president of the famous Picton Folk Performing Company. Just 38 years old, she passed away unexpectedly from complications arising from a foot injury on December 12th, 2007, on the way from JFK Airport to visit her family in New York for Christmas. In true Picton style, hundreds of persons gathered at the Cathedral to get a final glimpse of her body and send her off.
Full Article : triniview.com

Suppose you were a defendant in a court case and, when you went to trial, you discovered that the judge was the employee of the plaintiff? In such a scenario, the judge would have no choice but to recuse himself. It would not matter if he argued that his financial relationship with the plaintiff would not affect his objectivity; or that he was not an employee per se but merely a director; or that he had already admitted to the court that he had a relationship with the plaintiff.
END_OF_DOCUMENT_TOKEN_TO_BE_REPLACED

The Manning Ministers have been selectively and actively preaching that the issue of instituting measures to arrest the crime pandemic will always be treated as a politically non-partisan matter. But PM Manning will not practice it and come out from his political crease when the occasion demands.

Mr.Winston Dookeran a former MP, Central Bank Governor and Leader of 148,000 citizens who are now without representation in Parliament, pounded the pavement and endured the pouring rains in front of Whitehall on Thursday with a large group of followers. His mission was to highlight publicly the further escalation of murders and the impotence of the Manning Cabinet in being able to reduce and stem the rising tide.
END_OF_DOCUMENT_TOKEN_TO_BE_REPLACED

The voice of the people, we are often reminded, is the voice of God. My rejoinder to this scriptural interpretation of democracy is: the masses so often prove to be asses, one wonders if God has any influence in secular matters like elections, party affiliations, and worst of all, in leaders people choose to anoint or lionise. Six weeks ago close to 200,000 Trinidadians chose Basdeo Panday and the UNC to represent them in Parliament. In fact, a few years ago twice that many among the electorate not only voted him into power, but hoisted him on their shoulders as Prime Minister and paraded him as a lion-king, exemplar supreme.
END_OF_DOCUMENT_TOKEN_TO_BE_REPLACED

CJ Sharma cleared
Hours after he received an official copy of the Lord Mustill Tribunal report, President George Maxwell Richards revoked the suspension of embattled Chief Justice Sat Sharma, paving the way for him to return to his job at the Hall of Justice, Port-of-Spain, today.

SHARMA RETURNS
The Chief Justice does not have to prove anything at all.
His stance is purely defensive
Chief Justice Satnarine Sharma yesterday dusted off his judicial robes, ready to return to office today after an international tribunal found that the case brought against him on a charge of judicial misconduct was weak.

President: Mustill report to be made public soon
The contents of the long-anticipated Mustill tribunal report will soon be made public, President George Maxwell Richards said yesterday.

CJ doesn’t have to prove anything

My mother used to say, “The more you live; the more you see.” She was correct. I never thought I would live to see the day when the Prime Minister of our country, at the opening of Parliament, offer his hand in friendship and camaraderie to the Leader of the Opposition, only to have the latter shake his hand and then wipe off the handshake with his handkerchief as if to say “I will to have nothing to do with you or this deliberative body.”
END_OF_DOCUMENT_TOKEN_TO_BE_REPLACED