In a statement issued, Vice-Chancellor Sir Hilary Beckles said the UWI “stands with the governments of the Caribbean in protesting the recent actions by the EU and calling for a more transparent and equitable regulatory system and joins the call for the EU to enter into a process to resolve the issue.”
END_OF_DOCUMENT_TOKEN_TO_BE_REPLACED

Under intense pressure from ongoing investigations by the FBI and Swiss prosecutors that have already led to 18 senior football executives being charged in the US on charges of money laundering, tax evasion and racketeering, Blatter said he had decided to step down.
END_OF_DOCUMENT_TOKEN_TO_BE_REPLACED

As he denied being the unnamed high-ranking official who authorised the payment of a $10m bribe to disgraced former Fifa vice-president Jack Warner, as alleged in last week’s US indictment, Blatter targeted his enemies and warned: “I forgive but I don’t forget.”
END_OF_DOCUMENT_TOKEN_TO_BE_REPLACED

LIVE UPDATES
FIFA is convening to elect a president, choosing between Sepp Blatter and Jordanian Prince Ali bin al-Hussein. If Blatter, currently under pressure over a massive corruption scandal, wins the vote, it will be his fifth term.

Sepp Blatter implied in his president’s address at the FIFA Congress that the £100million corruption scandal was a Western conspiracy. Blatter claimed things would be different if two other countries had emerged from the envelopes.

He meant England for 2018 and USA for 2022 – a dig at the British media who have led the anti-Blatter agenda and the FBI, whose investigations led to seven arrests and 14 officials indicted on bribery and kickback charges by the US Attorney.
END_OF_DOCUMENT_TOKEN_TO_BE_REPLACED

Putin: FIFA-linked arrests are US attempt to thwart Blatter re-election

The FIFA-linked arrests on the eve of the re-election of the organization’s chief are an obvious attempt to thwart Sepp Blatter’s re-appointment, Vladimir Putin said, answering journalists’ questions. He added it’s another example of US meddling abroad.

Russian President Vladimir Putin has said the US could be selfishly motivated for its own gain, as was the case with Edward Snowden and Julian Assange.
END_OF_DOCUMENT_TOKEN_TO_BE_REPLACED

UPDATE: MAY 28, 2015 Jack leaves prison in an ambulance
JACK Warner, who woke on Wednesday as a free man, but went to sleep accused and imprisoned, was able to make bail this afternoon, and leave the Frederick Street prison in Port of Spain. He left in a prison ambulance.

JACK Warner was this afternoon granted $2.5 million bail but has failed to secure his release. In addiiton, his attorney were unable to secure an emergency sitting of a judge in the High Court, to consider his bail application. Warner is now at an unknown location. It is uncertain whether he will spend the night at the Maximum Security Prison, Arouca, or at a police station.
END_OF_DOCUMENT_TOKEN_TO_BE_REPLACED

Within days of the announcement by US authorities that they had intercepted 700-odd pounds of cocaine shipped from Trinidad to Norfolk, Virginia, and the well-publicised arrival here of a number of Drug Enforcement Administration (DEA) agents, I sensed that something had gone awfully wrong.
END_OF_DOCUMENT_TOKEN_TO_BE_REPLACED 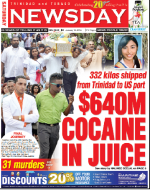 The cocaine was stored inside tins of Trinidad Juice Company juices which were part of a consignment of goods that arrived at the Norfolk Port after being shipped from Trinidad. The cocaine, believed to have originated from South America, was hidden inside 700 juice tins bearing the markings of the Cooperative Citrus Growers Association (CCGA) which is located off the Eastern Main Road in Laventille.
END_OF_DOCUMENT_TOKEN_TO_BE_REPLACED