Within recent times, massive chupidness has overtly erupted in T&T in regard to Trinbagonians taking their jabs. Indeed, the clarion call has been publicly bandied about to the extent that Trinbagonians are “skeptical” and “hesitant” toward agreeing to take their jabs. No problema.

The salient fact of the matter is that it is a well-known and accepted fact that Trinbagonians just have a magnetic love for “foreign.” In other words, this writer is of the totally firm conviction that Trinbagonians are “skeptical” solely because they have noticed albeit totally brainwashed that Americans feel that way also. Totally false and stupid.
END_OF_DOCUMENT_TOKEN_TO_BE_REPLACED

How about some accountability for Afghanistan, Iraq, Libya, Syria and Yemen?

If you want to know how the United States wound up with “government by stupid” one need only look no farther than some of the recent propaganda put out by members of Congress, senior military officers and a certain former president. President George W. Bush, who started the whole sequence of events that have culminated in the disaster that is Afghanistan, is not yet in prison, but one can always hope.
END_OF_DOCUMENT_TOKEN_TO_BE_REPLACED

If there was anything shocking about what happened in Afghanistan last weekend, it was the millions of people who were surprised by the speed at which the Afghan regime collapsed, the military imploded and the Taliban swiftly moved in to declare itself the new government.

BBC journalists referencing Saigon way back on May 1, 1975, when the last Americans who were evacuated from a war that never should have been, reversed on board the aircraft, kicking away desperate Vietnamese who had worked for the US, and who wanted to escape before General Giap’s army took control of the country. “Experts” spoke of the colossal waste of US resources in pursuing yet another ‘mission impossible’ in a country and among a people who will never be tamed, not by Western standards anyway.
END_OF_DOCUMENT_TOKEN_TO_BE_REPLACED

END_OF_DOCUMENT_TOKEN_TO_BE_REPLACED

How the Taliban Overran the Afghan Army, Built by the U.S. Over 20 Years

KABUL—The Afghan government outpost in Imam Sahib, a district of northern Kunduz province, held out for two months after being surrounded by the Taliban. At first, elite commando units would come once a week on a resupply run. Then, these runs became more scarce, as did the supplies.

“In the last days, there was no food, no water and no weapons,” said trooper Taj Mohammad, 38. Fleeing in one armored personnel carrier and one Ford Ranger, the remaining men finally made a run to the relative safety of the provincial capital, which collapsed weeks later. They left behind another 11 APCs to the Taliban.
END_OF_DOCUMENT_TOKEN_TO_BE_REPLACED

Smedley Darlington Butler (July 30, 1881 – June 21, 1940) was a United States Marine Corps major general, the highest rank authorized at that time, and at the time of his death the most decorated Marine in U.S. history. During his 34-year career as a Marine, he participated in military actions in the Philippines, China, in Central America and the Caribbean during the Banana Wars, and France in World War I. Butler later became an outspoken critic of U.S. wars and their consequences. He also exposed an alleged plan to overthrow the U.S. government.
END_OF_DOCUMENT_TOKEN_TO_BE_REPLACED

On Thursday last, US President Joseph Biden signed into law an important bill (the Juneteenth National Independence Day Act) that makes June 19 a national holiday in the United States to commemorate the end of slavery.

In signing this bill President Biden reminded Americans: “The promise of equality is not going to be fulfilled until we become real—it becomes real in our schools and on our main streets and in our neighbourhoods” (NYT, June 18)
END_OF_DOCUMENT_TOKEN_TO_BE_REPLACED

“Get the niggers,” was their slogan, / “Kill them, burn them, set the pace. / Let them know that we are white men, / Teach them how to keep their place.”

I had just left Harvard University as an assistant professor and was doing “Time to Talk,” a series of interviews for T&T Television. In 1982 I interviewed Sam Nujomo, the founding father of Namibia, where he had addressed the UN Decolonization Committee about his country’s independence. We talked about Namibia’s struggle for independence and the stain German genocide had left upon the consciousness of his people.
END_OF_DOCUMENT_TOKEN_TO_BE_REPLACED 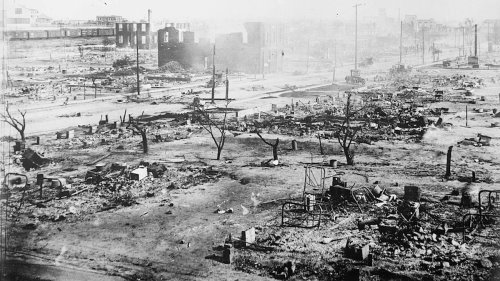 Memorial Day marks the 100th anniversary of the 1921 Tulsa race massacre, one of the deadliest episodes of racial violence in U.S. history, when the thriving African American neighborhood of Greenwood in Tulsa, Oklahoma — known as “Black Wall Street” — was burned to the ground by a white mob. An estimated 300 African Americans were killed and over 1,000 injured.
END_OF_DOCUMENT_TOKEN_TO_BE_REPLACED

An amazing contradiction that is embedded in the dissemination of information via technology that seems to evolve at a dizzying pace is how easy it is to fool massive numbers of people into believing glaring lies. Disinformation, a craft that is as old as civilisation itself, which has been used in warfare and in politics from ancient times to today, remains a weapon of mass confusion in the armories of sovereign states as much as parties that could, and have, catapulted many of them into power against immense odds.
END_OF_DOCUMENT_TOKEN_TO_BE_REPLACED