IT is disingenuous for Members of Parliament to be offering to refund salaries paid to relatives in breach of parliamentary rules, to quibble over definitions of employment, to suggest that new rules should not affect old behaviour or to dismiss them as mere guidelines. The fact that one of those MPs is Wade Mark, former speaker of the House under whom the parliamentary rules regarding employment at MPs constituency offices were reviewed and changed before being implemented in the current term, is scandalous.
END_OF_DOCUMENT_TOKEN_TO_BE_REPLACED

I switched on my television last Friday just in time to see and hear a stern-looking House Speaker Bridgid Annisette-George say to former minister and current MP for Caroni Central Bhoe Tewarie, “You have three seconds to wrap up…starting now!”

I did a double-take, wondering if I hadn’t mistakenly tuned in to the Western channel rather than Parliament, some wild-west movie in which the “fastest” gunman in town gives an impossible ultimatum to his adversary.
END_OF_DOCUMENT_TOKEN_TO_BE_REPLACED

When House Speaker Wade Mark invoked the contentious constitutional provision that an elected MP, Herbert Volney in this instance, must vacate his seat upon resigning or being expelled from the party on whose slate he was elected to Parliament, it piqued my interest. You see, I was a principal player in the events that led to the passage of that amendment to the Constitution in 1978, and I am intimate with its genesis.
END_OF_DOCUMENT_TOKEN_TO_BE_REPLACED 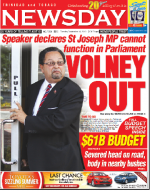 Speaker Wade Mark removed St Joseph MP Herbert Volney, “with immediate effect” from the House of Representatives moments after yesterday’s Budget Speech, in an unprecedented invocation of the “Crossing of the Floor” provisions of the Constitution.

Volney resigned from the United National Congress (UNC) — on which ticket he had been elected to the House on May 24, 2010 – after being fired as Justice Minister over the “section 34” scandal, and has since joined the Independent Liberal Party (ILP).
END_OF_DOCUMENT_TOKEN_TO_BE_REPLACED

AT all times, human beings must be able to distinguish right from wrong; it is what differentiates us from other life-species. At all times, too, man must have the fortitude to stand up for what is right, to speak out against injustice, whatever the consequences he may face for his outspokenness. Today I feel compelled to make such stand on an issue that many may deem unimportant, and for which I risk being condemned.
END_OF_DOCUMENT_TOKEN_TO_BE_REPLACED

There will be much speculation until next month as to the identity of the government’s nominee for the next president of Trinidad and Tobago. With a nomination deadline of February 5, a new president will be elected on February 15 ahead of the March 17 end of the five-year term of President George Maxwell Richards.
END_OF_DOCUMENT_TOKEN_TO_BE_REPLACED

A FEW weeks ago, Dr Brinsley Samaroo telephoned me. After we exchanged pleasantries, he got down to stating the purpose of his call. House Speaker Wade Mark had asked him to make contact with a number of ex-parliamentarians whom he (Mark) wanted to recognise for their service to Parliament, and, presumably, to country. Brinsley informed me that I was among those selected, and he wanted to inform me and to gather some biographical data from me.
END_OF_DOCUMENT_TOKEN_TO_BE_REPLACED

SUSPENDED
Manning sanctioned for being in contempt of Parliament
“Mr Patrick Augustus Mervyn Manning is accordingly suspended from the service of this House with immediate effect,” declared House Speaker Wade Mark last night.

Mark did not state for what period of time but a suspension cannot cross a session of Parliament, which is the maximum threshold for a suspension. This session ends on June 18.
END_OF_DOCUMENT_TOKEN_TO_BE_REPLACED

In a report tabled in Parliament late yesterday, the Parliament’s Privileges Committee found that Manning, through his refusal to co-operate with the proceedings, failed to answer a case against him which was referred after a motion was brought by Works and Transport Minister Jack Warner on November 24.
END_OF_DOCUMENT_TOKEN_TO_BE_REPLACED

Kamla: Emancipation about struggle, triumph
PRIME MINISTER Kamla Persad-Bissessar yesterday urged the nation to not only see Emancipation Day as merely a public holiday but rather to reflect on the struggles of the ancestors of Afro-Trinbagonians who rose up from the chattel of slavery to take their rightful place in a free society.
END_OF_DOCUMENT_TOKEN_TO_BE_REPLACED