Sometimes the beauty of a goal is in its build up, not the scoring.

Last week, on June 14th to be precise, Express journalist Ria Taitt revealed that the Lower House (MPs) had just approved amendments to two bills giving themselves fat new pensions. The story took about 48 hours to really generate interest because it’s the middle of the first round of World Cup 2014 in Brasil. And soccer-mad TnT, caught up with the beautiful game, barely have time for Anil, weed stashes, prostitutes in hotel rooms, or Government programs that are funding criminals, far less to pay attention to debates in their Parliament. Oh, and we had a long holiday weekend. And Laventille and the Police/Army were at war.
END_OF_DOCUMENT_TOKEN_TO_BE_REPLACED

A financial boost for judges and Parliamentarians is on the way.

The holder of the third highest office in the land—the Chief Justice—will now receive the highest pension- $93,223 a month tax free.

This, according to the new pension arrangements passed by the House of Representatives on Friday night at the International Waterfront Centre, Port of Spain.
END_OF_DOCUMENT_TOKEN_TO_BE_REPLACED

Some time this month, Linius Rogers’s motion that instructs the male members of PNM to wear their balisier ties in Parliament, municipal and city bodies and at official functions will come up at the PNM General Council for a discussion and a vote. As a member of the PNM, I support this motion unreservedly because it is a way to keep us true to our roots and a sign that we are a distinct political formation in Trinidad and Tobago.
END_OF_DOCUMENT_TOKEN_TO_BE_REPLACED

In a report tabled in Parliament late yesterday, the Parliament’s Privileges Committee found that Manning, through his refusal to co-operate with the proceedings, failed to answer a case against him which was referred after a motion was brought by Works and Transport Minister Jack Warner on November 24.
END_OF_DOCUMENT_TOKEN_TO_BE_REPLACED 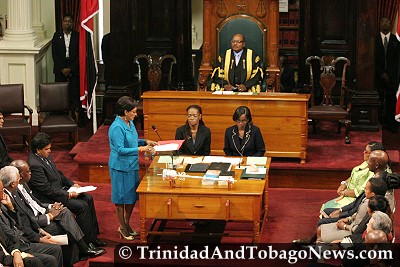 END_OF_DOCUMENT_TOKEN_TO_BE_REPLACED

PM dares Opposition: ‘My lawyers ready for you’
PRIME MINISTER Patrick Manning warned Opposition UNC MPs that they will not be protected by parliamentary privilege when they go on a public platform and say things which they planned to say in the debate on the no-confidence motion in him which was scheduled to take place yesterday in the House of Representatives.
END_OF_DOCUMENT_TOKEN_TO_BE_REPLACED

So When’s Election
BUCKLING under mounting pressure against his administration, Prime Minister Patrick Manning yesterday advised President George Maxwell Richards to dissolve the ninth Parliament, one day before an Opposition motion of no-confidence was scheduled to be debated in Parliament.
END_OF_DOCUMENT_TOKEN_TO_BE_REPLACED

SIPARIA MP Kamla Persad-Bissessar probably surprised even herself at the extent of her whopping landslide victory over Couva North MP Basdeo Panday for the UNC leadership last Sunday. She got 13,000 votes to Panday’s 1,300.

WITH the greatest deference to House Speaker Barry Sinanan, I think he should realise by now that he presides over a House of Clowns. If he values his integrity, he should run like hell, but not before he inflicts some choice words on the 41 jokers who sit in Parliament. In case the Speaker is short on gems from the “mooma-lexicon”, he can feel free to summon my help, since I co-authored the Obscene Dictionary.
END_OF_DOCUMENT_TOKEN_TO_BE_REPLACED