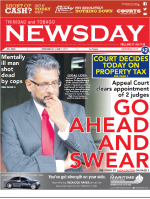 In a unanimous decision yesterday, Justices of Appeal Allan Mendonca, Nolan Bereaux and Peter Rajkumar said they were satisfied the Judicial and Legal Services Commission (JLSC) was properly constituted. They also threw out a substantive claim of former United National Congress Senator Devant Maharaj who challenged the constitutionality of the JLSC’s composition, on the basis that the Constitution does not permit more than one retired judge to sit in the commission.
END_OF_DOCUMENT_TOKEN_TO_BE_REPLACED

The unseemly public spat between President Anthony Carmona and Prime Minister Keith Rowley, if it gets any nastier, could bring both offices and office-holders into further disrepute, and add to the list of public offices, officials and institutions in which citizens have lost or are losing confidence.

We can take it as fact that based on the structural political divide in the country, at least half the adult population believes that Dr Rowley is wrong, that he is lying. We should not be ashamed to admit that most people judge politicians not on facts or evidence adduced, but on partisan politics, whatever the issue or whoever happens to be under scrutiny.
END_OF_DOCUMENT_TOKEN_TO_BE_REPLACED

Additionally, he said, Italian Import/Export Limited, a registered local company and/or its directors, neither purchased nor imported any wine on behalf of the office of the President.
END_OF_DOCUMENT_TOKEN_TO_BE_REPLACED

Heard the one about the tea bag? It only works when it is in hot water? Listening to such wisdom, I couldn’t help but think about my PNM government and my country. The prime minister is in California looking after his health. When a man takes his entire family (the old and the newly acquired) to be around him on such an occasion, then something may be amiss. He has asked the nation to pray for him. I think we should do as he asks.
END_OF_DOCUMENT_TOKEN_TO_BE_REPLACED

When constitutionally-independent institutions in the country seem to be collapsing, when holders of the highest offices seem confused about their roles and perplexed about their powers, and when the law publicly proves to be the proverbial ass, then, Trinidad & Tobago, we have a problem…a very serious problem.
END_OF_DOCUMENT_TOKEN_TO_BE_REPLACED

The problem is that members of the public might have been so distracted by the President’s rumshop reference—a terse dismissal of their questions and concerns—that crucial aspects of his statement might have been lost.

President Anthony Carmona’s reference to “rumshop logic” in describing citizens’ comments about the latest fallouts from the Integrity Commission is unfortunate. Not only did it defeat what was an otherwise laudable attempt to bring clarity to an issue that has long been a focus of national concern and debate, it has also reinforced recent negative perceptions of that agency. The President was well within his rights to deal with the matter at length—he was, after all the focus of much of the criticisms following the latest implosion of that august body. Unfortunately, his choice of words and his condescending tone served to alienate rather then enlighten.
END_OF_DOCUMENT_TOKEN_TO_BE_REPLACED

Senior counsel Martin Daly has questioned the legal basis on which the Chief Personnel Officer granted approval for the payment of a tax-free $28,000 housing allowance for President Anthony Carmona.

And former head of the Public Service Reginald Dumas stated yesterday that it would be “ethically reprehensible” if President Carmona is indeed living in State-provided accommodation, while at the same time receiving a housing allowance.
END_OF_DOCUMENT_TOKEN_TO_BE_REPLACED

President Anthony Thomas Aquinas Carmona, to give the man his full handle as Prime Minister Kamla Persad-Bissessar never tires of doing, is convinced that my fellow columnists and I are “bulldogs in a ring”, uncouth, devoid of intellect, stuck in the “same ole, same ole” mode, and engaged in self-aggrandisement and worse.
END_OF_DOCUMENT_TOKEN_TO_BE_REPLACED

I’m beginning to believe that President Anthony Carmona thinks he is still a judge, that Trinidad and Tobago is his courtroom and that we are all before him on a charge.

“Madam,” he chided Opposition Whip, Marlene McDonald last Friday as he addressed the opening of Parliament, “I am speaking about conduct!”
END_OF_DOCUMENT_TOKEN_TO_BE_REPLACED

There was a picture recently of Pope Francis playing the Steelpan next to T&T president Anthony Thomas Aquinas Carmona who presented it to him as a gift. This picture was published by the media, several Steelpan websites and has made its way around various social media platforms. One website exclaimed: “Truly a great day for our nation and our national instrument! The pope is a Trini now!” Another Steelpan website expressed, “Steelpan is the sweetest!! Just ask the Pope.”
END_OF_DOCUMENT_TOKEN_TO_BE_REPLACED