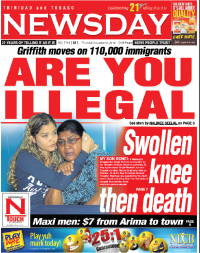 He warned however, those who fail to comply will be found and deported.

Several arms of the Ministry including the Immigration Dept, Police and the National Operations Centre (NOC) will be engaged in the illegal immigrant weed out exercise.

“After the window closes, all persons who have not been regularised, we will be doing a massive campaign. We will be like a parang side…we will be going from house to house and any person who is here illegally we will be sending them back to their country,” Griffith told Newsday.

He said certain procedures and formalities are being worked out at present and this window of opportunity will be afforded to illegal immigrants in the next few weeks. Griffith said there are many illegal immigrants living in this country who are contributing heavily to crime and gang activity. He said if these undesirables are removed, it will have a positive impact on the fight against crime. The country will benefit when these illegal immigrants are returned to their respective countries,” Griffith said.

The Minister noted it is a fact there are over 110,000 illegal immigrants in this country and from records he has gotten, there may be more. “I don’t want this to be seen as a witch hunt in any way. The fact is that anyone can question my stance and I am not turning a blind eye to the fact that over ten percent of the adult population in this country are persons here illegally. That is unacceptable.”

“It goes to the concept of the ‘broken window theory’…people might not see this as a serious situation but it is, because we have intelligence that confirms there are many persons who are here as illegal immigrants and who are involved in all aspects of drug related activity and serious crimes.

“It is not coincidental that this problem started just around the same period of the escalation in gang activity, around 2004 or 2006, so it shows there is a relationship between illegal immigrants and serious crimes,” Griffith told Newsday.

Griffith made it clear that not all immigrants are involved in crime. He said immigrants have contributed to this country’s development but those upstanding citizens are the ones whose status are above board and are not in this country on the sly.

Griffith said this initiative does not mean that all illegal immigrants will be targetted for deportation hence the reason for a window of time and opportunity being afforded to them to check with the authorities to have their status updated. He believes many of these immigrants can make a meaningful contribution to society but they must do so as properly documented immigrants with a legitimate reason for being in the country.

“Illegal immigrants are utilising the education system, health system, employment opportunities. Listen, Trinidad and Tobago welcomes you with open arms but you must be regularised. So we are giving these persons a chance to come forward during this brief window of opportunity because if we find you afterwards we will automatically send you home.

“Come forward, regularise yourself, take your pain and if you have an employer who can vouch for you and we are told you can be of value to the country and you do not fit the two criteria instrumental in removing you, that is, (a) being a liability to the public purse, you don’t have a job, we don’t know where you are living, you don’t have any employer, you have no skill or (b) you are a threat to National Security…if you do not fit these categories then you stand a very good chance of being regularised,” Griffith said.

2 thoughts on “ARE YOU ILLEGAL”