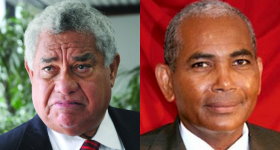 Scandalous is the word for revelations about the behind the scenes wheeling and dealing at CL Financial, the cooking of the books, the hiring of a convicted felon to serve as the group’s global representative and other dubious deals geared toward fulfilling one, single-minded objective: the establishment of a global empire.

Testimony given to the Clico Commission of Inquiry on Monday by former CL Financial chief financial officer Michael Carballo was both riveting and shocking. Speaking frankly, Mr Carballo explained how greed and naked ambition brought CL Financial to its knees and made Clico bankrupt. According to Carballo, funds for purchasing companies in the USA and Europe to expand the group’s domain, were borrowed using Angostura’s good name and when the deals went bust through a lack of due diligence, the losses were placed on Clico’s books, making policyholders liable for all risks involved in dicey decisions made in the boardroom or by former executive chairman, Lawrence Duprey. Carballo said by 2008 when he took over as CFO, CL Financial had $3.3 billion in debt to Clico and it was company practice to keep risking deals off Angostura’s books by arranging inter-group funding to mask ventures. It is thus no surprise that Clico became insolvent and that policyholders lost their investments.

Evidence in this inquiry is revealing that the CL group employed a Machiavellian approach to doing business, that to the executive and Mr Duprey, the ends justified the means. CL Financial was prepared to become a global brand at any cost and that included transferring debt from subsidiary to subsidiary in a high stakes shell game which risked the founding company, Clico, established by Mr Duprey’s uncle, Cyril Duprey. The group also saw no conflict in hiring a global representative with a record because the man had allegedly useful international contacts.

Carballo told the inquiry that the company employed at a great cost to the company, CL World Brands chief executive Arnaud de Trabuc who had been jailed for mail fraud in the US because he was the man that senior management at CLF regarded as their man in Europe and the man who Duprey thought would bring him the global deals he wanted. The result of hiring a fraudster: the group made risky deals and the fraudster made a fortune from commissions and side deals.

“Lawrence (Duprey) saw a benefit in it even though Lawrence knew there was a risk. I think Lawrence was willing to live with the risk of Arnaud for the benefit of making contacts. Arnaud had his benefits even though he was jailed for mail fraud,” Carballo said.

The tale of CL Financial is similar to that of financial institutions which triggered the global economic crisis: a solid company, unregulated by the State, overextended itself into collapse. Much as the bankers and investors in the US and Europe, CL Financial was given free rein to use the funds of the man on the street to gamble. It is also evident that Lawrence Duprey was running a public business like a private fiefdom.

The clean-up and crackdown of the group has come too late for many who have lost their savings and it is truly difficult to understand how Clico could have been allowed to function as an unsupervised private company when it was taking public monies for insurance policies and was a member of a group that comprised a total of 289 entities in 32 countries in the areas of real estate, financing, spirits and energy. In the absence of scrutiny, the public’s money became the private piggy bank of speculators and now, once again, the public´s money is being used to rescue and recompense policyholders.

There is one line of testimony which reveals Mr Duprey’s sangfroid towards losses which put the company in jeopardy.

“I think Lawrence Duprey recognised he made a mistake,” Carballo said. “Lawrence is not necessarily fazed by those things because in business, business is risk.”

But Clico was not only about business, it was about people, ordinary people who believed in the company and entrusted it with their savings and the risk taken was not Duprey’s but theirs. It was their money he was permitted to gamble and which he lost.

Had Lawrence Duprey not flown so close to the sun, he might have remembered the earthly words of his deceased uncle. “Give a man value, give a man service and he will support you” was the philosophy of Cyril Duprey founding father of Clico. Cyril Duprey must be turning in his grave.

$206M FEE
THOUGH he resigned from the CL Financial Group in April 2008, former group chief financial officer L Andre Monteil continued to exert influence on the affairs of the group, long after he had turned away from the public glare of the company amid the HMB share purchase scandal.

Karen wanted urgent action
AT A MEETING on January 23, 2009 former finance minister Karen Nunez-Tesheira told former CL Financial (CLF) chief financial officer Michael Carballo that she knew about the liquidity troubles at CLF, even before he held his first meeting with her.

Monteil picked for political link
ANDRE MONTEIL was selected to help broker the billion-dollar bailout of CL Financial because of his “political” affiliation.

Duprey’s man in Europe
The name Arnaud de Trabuc, is not generally known in Trinidad and Tobago, although he visited Trinidad in 2003 when CL World Brands acquired the Hine Brands of Cognac and was featured in Newsday in an interview with CL Financial chairman, Lawrence Duprey.

Carballo spills beans on Lascelles deal
The Home Mortgage Bank (HMB) was the beneficiary of a $27.2 million fee for providing a guarantee for CL Financial’s purchase of Lascelle de Mercado in 2007.

‘Man in Europe’ a fraudster
FORMER CL World Brands chief executive Arnaud de Trabuc was a convicted fraudster who profited from commissions from all sides of lucrative group deals which placed pressures on Clico and other group subsidiaries, in the view of former CL Financial (CLF) chief financial officer Michael Carballo.

Monteil was told to step down
ANDRE MONTEIL was forced to step down as the Group Financial Director of CL Financial because of the bad publicity generated by his controversial acquisition of Home Mortgage Bank (HMB), his successor Michael Carballo told the Commission of Enquiry into the collapse of CL Financial and the Hindu Credit Union (HCU) yesterday.

15 thoughts on “Scandalous Wheeling and Dealing at CL Financial”