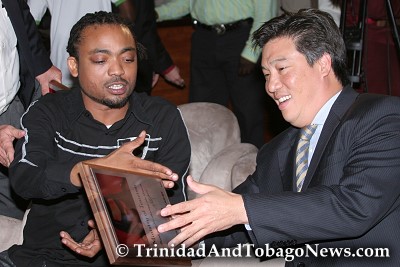 Is it a twist of fate or could it be ‘jumbie’ at Zen? Zen is once more in the news with another controversy; this time, it involves local superstar, Machel Montano who is known for his energetic performances. This incident took place following a function Machel Montano held at club Zen to thank various parties for the success of his Carnival and Madison Square Garden concerts.

It is reported that Machel Montano and his entourage got into a brawl with several persons at the Zen club last night. The brawl continued outside the Zen night club and it is reported that one of the patrons who was involved in the brawl is in hospital. The matter is now being investigated by the Belmont police.

Kernal Roberts, member of Montano’s band, called in on a radio programme to explain what had happened. This is his account of what occurred. Machel Montano was at the Zen club in the general admittance level when some females present tried to dance with him. In Kernel’s words,

The girl only trying to wine on Machel whole night. Machel told her kindly and peacefully, ‘Babes, ah not on that right now, I’m just chilling out.’ The drunk guy that she was dancing with, decided now to push up in front of Machel and wine right in front of Machel as if he backing back on Machel. All of a sudden, Machel was like, ‘All yuh can’t go [elsewhere]; the club empty… all yuh have to come and wine in front of me?’ Next thing you know, drinks spilled and Machel got soaked down… Obviously Machel was like ‘what’s that one?’ The security was called in immediately [and] he [the person who soaked Machel and his crew] got thrown out of the club.

Mr. Roberts said that he never saw Montano slap anyone across the face.

A while after the initial incident, Roberts said that he went downstairs to check something in his car and, “Coming back from the car park into the club, I witnessed the whole posse cussing downstairs.” Upon returning upstairs, he heard people saying things about Machel and other obscenities. “I was like, ‘Yo, get them people from in front there; they cussing and getting on.'” He said that Machel and the rest of the entourage was still inside at this time. He said that he returned inside and told Machel, “Machel leh we get out of here! Ah set of stupidness going on outside there and people cussing and getting on stupid and they are calling out your name; leh we look to ride…It ain’t make no sense we staying on.”

When we were leaving, the girls and them was getting on in this big manner downstairs, cussing and getting on [and] start to oppose Machel now. I tell yuh, the girl take off she slippers like she going to charge into Machel…[she] start to come get on in the man face and spit in the man face…Next thing you know, (Machel of course, he head a little bad, everybody, as normally when you go to the club, you come out), he get angry, I wouldn’t lie, he get angry; he start to lose he voice and thing but up to now I eh see Machel touch that girl yet. Machel did not touch nobody last night there.

From the time we reach downstairs and that little thing start there, so much security was around Machel that you couldn’t get to Machel to start with. Is all kind of fans and passers-by…ah only seeing yellow jersey. The girl man and them start to rush we and that is what made the whole bacchanal start. I think when this ting happen, somebody who was liming with us went back and spill[ed] back a drink on the fella, and that is what start the main thing outside. He start to run in and was real bacchanal from there. But security was trying to cool down the whole scene. I don’t know how the man end up on the ground; like he get an unlucky blow from somewhere.

Machel would not lash anybody just like that; you have to really push Machel to the limit. Machel could be a little ignorant when he ready but not like that; but people carrying the story overboard.

Remember this is just Kernel Roberts’ version of what transpired; so treat it as such. The matter is now being investigated by the police, and I am sure over the next few days more details and other versions of this story would be made available.

9 thoughts on “Machel Montano in Brawl at Zen”