It is quite an indictment against most if not all of the adult population of this country that focus of attention in this election campaign thus far has been on scandals aplenty that titillate our perverted taste buds.

We are riveted to Jack Warner’s nocturnal meanderings that have traversed paper trails involving large sums of money allegedly paid to his former friends in the UNC, and crept into the private lives of the Prime Minister and her friends.
END_OF_DOCUMENT_TOKEN_TO_BE_REPLACED

We the voters of Chaguanas West of the elections held in 2010 and 2013 did not vote for the current adversarial “buss the mark” agenda being prosecuted by our MP Jack Warner. He no longer represents our views and aspirations having voted for him overwhelmingly and unprecedentedly in the 2013 bye-election.
END_OF_DOCUMENT_TOKEN_TO_BE_REPLACED

Jack Warner is not a mad man—or delusional, as the Prime Minister euphemistically puts it.

If he was, then the PM, who chose him to act in the highest office in the land on several occasions, and assigned him to the national security portfolio three years ago, must be madder than him.

And members of Cabinet and the People’s Partnership hierarchy who clung to him as if he were a latter-day Jesus or Rama or Muhammad, are the maddest people ever to have governed a country.
END_OF_DOCUMENT_TOKEN_TO_BE_REPLACED

POLICE confirmed yesterday that they found five grammes of a “plant like material resembling marijua-na” at the Prime Minister’s private residence, prompting Acting Police Commissioner Stephen Williams to order an investigation into the mat-ter.

A report of the find was submitted to Williams at 2 pm yesterday — a day after he said that the police were not in possession of any information on drugs being found at the Prime Minister’s residence. The report, signed by Snr Supt Gould and given to Williams yesterday indicated, that the substance contained in a plastic bag was discovered in the male wash-room of a Gazebo on the western end of the Prime Minister’s residence at Phillipine. The discovery was made by a Special Branch officer on Friday April 19, 2013 at about 8.50 am.
END_OF_DOCUMENT_TOKEN_TO_BE_REPLACED

Expelled-from-Parliament MP Dr Keith Rowley and leader of the PNM is under political and moral obligation to clear the decks of those incriminating issues still hanging over him like swords of Damocles before he can be admitted into the Leaders Debates chamber to stand up as an equal to the Prime Minister and leader of the UNC. He must issue an apology to the Speaker of the House and to those MP’s whose reputation has been sullied by his deliberate falsehoods and fabrications.
END_OF_DOCUMENT_TOKEN_TO_BE_REPLACED

As she enters uncharted territory seeking a second term in office, the Prime Minister exudes a measure of confidence that is at odds with a widely-held perception that her People’s Partnership coalition will lose the general election.

She and her ministers have made it clear that they plan to campaign on performance, which they hope will mute charges of corruption, waste and scandal that were deafening during the past five years.
END_OF_DOCUMENT_TOKEN_TO_BE_REPLACED 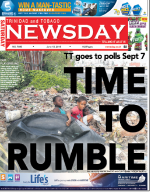 In a statement at the House of Representatives, the Prime Minister informed the nation that she would advise President Anthony Carmona, “to dissolve Parliament at midnight on Wednesday 17th June, 2015” – a move which will bring to an end the Tenth Parliament and clear the way for the Eleventh.

In announcing the date of the election, Persad-Bissessar said her Government was the first under the Republican Constitution to serve its full term. She said it did so despite the expectations of the Opposition.
END_OF_DOCUMENT_TOKEN_TO_BE_REPLACED

This proposal of the CIC Debates Commission to host two Leaders Debates involving the PM Kamla Persad-Bissessar and PNM leader, Dr Keith Rowley is clearly indicative of the extent to which the Chamber is fossilized in and slave to the old paradigm and the old politics or order championing talk-talk and more talk. It is this continuing focus on and slavish obeisance to artificial talk that has hindered the rapid development of T&T. We continue to elect eye and ear-servants galore.
END_OF_DOCUMENT_TOKEN_TO_BE_REPLACED

Corpus Christi morning, I come awake, latish, closer to seven o’clock. I tune in to BBC television to see what’s happening in the world, since, Thursday being a Christian holiday, the local electronic media stations will have no real news.

I do a double-take, re-check the channel number when, big and bold at the bottom of the screen I see “…Trinidad and Tobago…breaking news…”
END_OF_DOCUMENT_TOKEN_TO_BE_REPLACED

Rowley, the People’s National Movement (PNM) political leader and Diego Martin West MP, made this statement in response to comments made by Warner in a paid televised political broadcast on Wednesday night.
END_OF_DOCUMENT_TOKEN_TO_BE_REPLACED