Patrick Manning was absolutely correct on all the reasons he cited for declining the Order of Trinidad and Tobago, as announced by Prime Minister Kamla Persad-Bissessar last Thursday.

It is amazing that in just about everything she says and does, the PM gets it wrong nine out of ten times. The furore over her insistence on enacting and implementing the “run-off” provision in general elections still rages, yet she puts both feet in her mouth by publicly announcing that she has advised President Anthony Carmona to confer the ORTT on Manning and Basdeo Panday.
END_OF_DOCUMENT_TOKEN_TO_BE_REPLACED 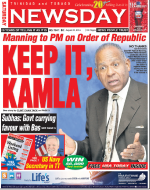 FORMER Prime Minister Patrick Manning yesterday publicly declined the recommendation of his successor — Prime Minister Kamla Persad-Bissessar — that he receive the country’s highest honour, the Order of the Republic of Trinidad and Tobago, at this year’s National Awards Ceremony at Queen’s Hall, Port-of-Spain on Independence Day.

During an Independence Day cocktail reception which she hosted at the Diplomatic Centre, St Ann’s on Thursday night, Persad-Bissessar announced she had recommended to President Anthony Carmona that former prime ministers Manning and Basdeo Panday receive the Order of the Republic.
END_OF_DOCUMENT_TOKEN_TO_BE_REPLACED