I am writing this column knowing that it will not be read by the target audience—young, black and ‘er…unschooled men.

Few if any in this group read anything, least of all newspapers. If they pick up an Express, it would be to watch a photograph of some dead “bredren”, felled by bullets from police or criminal, same difference, and to wonder if they, upon meeting a similar fate, would make a pretty corpse.
END_OF_DOCUMENT_TOKEN_TO_BE_REPLACED

After all the tears and anger and outrage and tributes and exhortations, what do we do? Dana is dead, gunned down gangland-style, making for good copy for a week or two, but what after that?

The politicians shed buckets of tears and scream: her death must not be in vain! The police vow to leave no stone unturned in their quest to bring her killers to justice. The preachers say she was an exemplar, her colleagues-in-law deem her irreplaceable, her friends say only good things about her, and her extended family mourns in a dignified manner.
END_OF_DOCUMENT_TOKEN_TO_BE_REPLACED

Speculations continue in the aftermath of the killing of Attorney, Journalist and Law Lecturer Ms Dana Seetahal as a stunned nation continues to reel from the shock of her death.

Police reports now show that the weapon, which would have used the caliber of ammunition shells found on the scene, is used mostly by military personnel.

CCTV camera footage is being scoured at this time but it is being reported that the Wingroad vehicle used in the killing may have been fortified with bags of cement to prevent it from moving should she have attempted to ram the vehicle after it blocked her access.
END_OF_DOCUMENT_TOKEN_TO_BE_REPLACED

AS PROMINENT Senior Counsel, Dana Seetahal, became a statistic in the country’s continuing grim murderous run yesterday, her assassination has triggered an emergency meeting of the National Security Council (NSC) for today and the posting of a million dollar reward for her killers, while police are reportedly examining video footage taken by someone who came close to the scene while the crime was in progress.

In addition to summoning the meeting of the NSC, Prime Minister Kamla Persad-Bissessar revealed yesterday she had spoken with the Honourable Chief Justice Mr Justice Ivor Archie, and they have agreed to meet, “in order to devote attention to necessary reforms in the criminal justice system and security issues connected there with.” (SEE PAGE 5)
END_OF_DOCUMENT_TOKEN_TO_BE_REPLACED

Dana Seetahal, SC was assassinated around 12:05 a.m. while driving through Woodbrook.

Ms Seetahal was just minutes away from her One Woodbrook Place home when she was gunned down in Woodbrook just after midnight this morning.

Concerned residents of the area reported hearing an “explosion” of shots and called the police who arrived 15 minutes after the shooting to find Ms Seetahal’s lifeless body slumped over the driver’s wheel, her foot still on the brake pedal.
END_OF_DOCUMENT_TOKEN_TO_BE_REPLACED 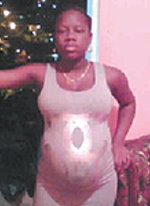 A mother of a six-week-old girl. An aspiring interior designer. An avid lover of steelpan.

All these things, and so much more, described 15-year-old Aleah Cain who was brutally gunned down on Tuesday night along Belmont Circular Road, Belmont mere moments after she left her home at Farrell Lane to get something to eat, despite protests from her mother.

“Aleah was sitting with me at home helping me comb my hair, when she suddenly tell me she was hungry, and she wanted food. I tell her we had bread and butter, and small stuff at home, but she said no, she wanted something different, so she going to the shop. I tell her, ‘Aleah, look at the time, it’s after 10!’ But she said she didn’t want the food at home, and she would go out and get something,” Aleah’s mother Lauren recalled yesterday.
END_OF_DOCUMENT_TOKEN_TO_BE_REPLACED