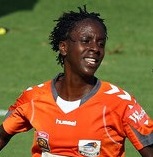 Kennya Cordner, star striker for the national women’s football team, appeared in the Port of Spain Magistrates’ Court yesterday charged with using annoying language to provoke a police officer to commit a breach of the peace.

The charge alleges that on Carnival Monday night, Cordner was outside Ma Pau on Ariapita Avenue when the music was shut off abruptly and she allegedly called out to some police officers nearby, asking why the music was stopped and complaining that they could not even wine on the police.

She was subsequently arrested and taken to Woodbrook Police Station and charged with the offence.

Cordner pleaded not guilty to the charge yesterday and will return to court on Monday.

She was represented by attorney Martin George.

Cordner, who hails from Tobago and wears the same No 19 jersey as her idol Dwight Yorke, has represented Trinidad and Tobago for several years.