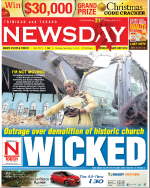 This is how Minister of National Diversity and Social Integration, Rodger Samuel, saw the demolition of the historic Greyfriars Church of Scotland on Frederick Street, Port-of-Spain, on of all days, Sunday, the Sabbath for most Christian faiths.

Samuel, a pastor, lamented the near complete destruction of the church even as his ministry has been in talks with its 84-year-old owner businessman, Alfred Galy, on preserving it as a heritage site. Even more outraged than Samuel was his adviser, Dr Nurah Rosalie Cordner who risked her life, climbing onto an excavator to stop the demolition crew of contractor, Don Ramdeen & Co, from tearing down the centuries’ old church.

A small group of activists also joined Samuel, and his adviser in their defiant stand.

The sound of the excavator disturbed the quiet of Frederick Street, on an overcast Sunday morning. Cordner got an alert about the demolition and stood between what remained of the church and the excavation when she got to the site.

The operator refused to shut down the excavator when she called on him to do so. She admonished the operator and the contracting company for disobeying a rule of law which states that the moment a person stands in front of any heavy machinery, it must be immediately shut off.

8 thoughts on “Demolition of Greyfriars Church Halted Amidst Protests”