On Monday 17th November, 2014, a Trinidadandtobagonews.com reporter visited the Manzanilla/Mayaro road which flooded and collapsed due to erosion caused by consistent rainfall, high tide conditions and the overflowing of the Nariva Swamp. Residents in the area were thus marooned in their homes and villages. The extent of the damage to the road has drawn national attention because of the unusual occurrence.

For over a week, the entire coastal front of Manzanilla which is over 20km long was transformed into a lake with the greatest physical destruction to public infrastructure occurring on the Manzanilla-Mayaro Road. Indeed, residents of the area have recounted similar incidents of the road being completely swept away around the central area of Manzanilla beach where the Hindu Festival of Kartik occurs. This time, however, the damage, particularly to the road, is far more extensive. 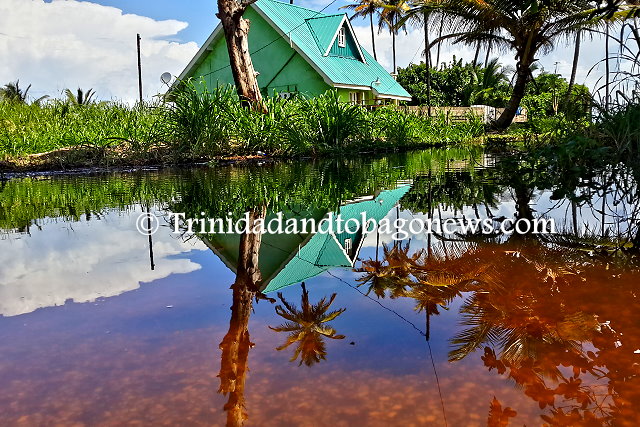 Swamp water is usually blocked by the road as well as the barrier beach that the road was built on from entering the sea. During the latest flooding, these waters passed seemingly without much resistance as a result of its sheer volume and magnitude across the road for several hundred meters. With flood waters drowning the majority of land between Manzanilla Point and the Nariva River mouth, the Manzanilla-Mayaro Road was practically impassable. Additionally, the velocity of the water and the resulting erosion of the sandy base of the road, contributed to the undermining of the road in areas of lowest elevation as the water rapidly drained out of the swamp into the sea during low tide. 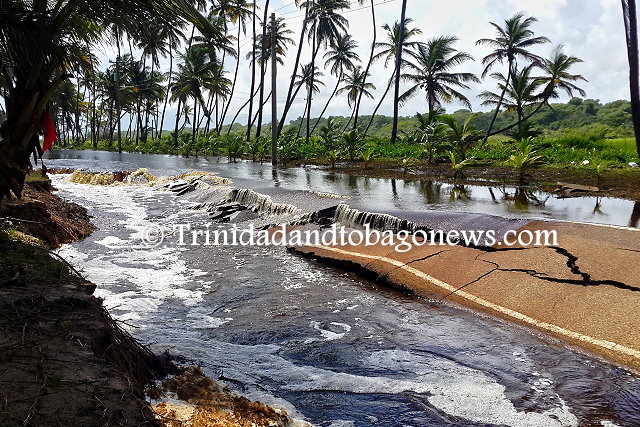 Flood waters drain into the collapsed section of the Manzanilla Road

During the weekend of the 15th-16th of November, 2014, many homes within the Mayaro and Manzanilla villages were severely damaged and crops destroyed leaving residents in urgent need of assistance. Disaster relief efforts which included the Trinidad and Tobago Defence Force, Office of Disaster Preparedness and Management, NGO’s and other organizations were in force over the period.

Further south, the very powerful and tidally-influenced Ortoire River that runs through Mayaro and other associated fishing and agricultural villages, also contributed to the immense flooding in the east. This is the same river that only a few months ago between March and May drew curious viewers to observe the blue glowing plankton bloom phenomenon in Mafeking and Cedar Grove Villages. 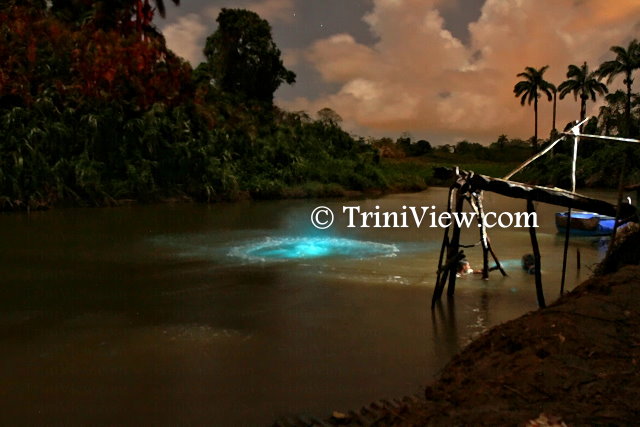 Ortoire River, only a few months ago drew curious visitors due to the ‘glowing river’

Aside from severe flooding on the coast, the Plum Mitan agricultural area, which is accessed from the Southern Cunapo Road, also experienced extreme flooding. The agricultural area which has a rich rice-growing history is located on the northern limits of the Nariva Swamp. The flooding here was directly connected to the back-up of waters at the coast as these waters drain into the Nariva River. A farmer from the Plum Mitan area shared that destruction of his agricultural plot was due to the heavy rainfalls. He estimated about two to three feet of water covered the area. 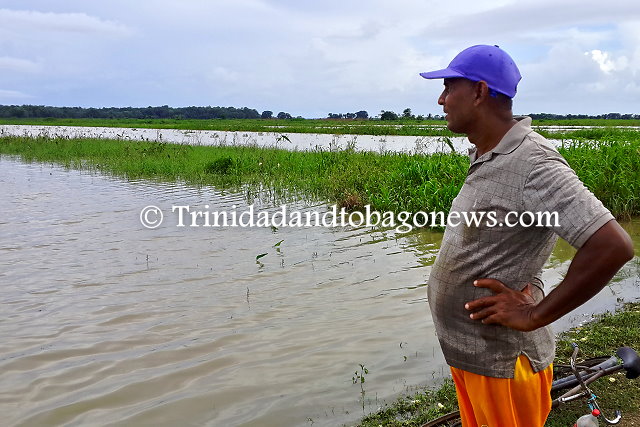 Farmer looks on at the destruction of this agricultural plot at the Plum Mitan Agricultural Scheme.

The Manzanilla beach stretch in the past century was much wider. In fact, before the oil industry took-off in the area and the road was built, the beach itself was used as an access road between Sangre Grande and Mayaro and Guayaguayare. While the road was generally well-nestled between coconut trees and away from the sea, in recent times, rapid erosion has eaten away significant areas of the coast by some conservative estimates of ten to forty meters. This has caused narrowing of the beach, death of swaths of coconut tree plantations, waves coming onto the road and damage to coastal properties. 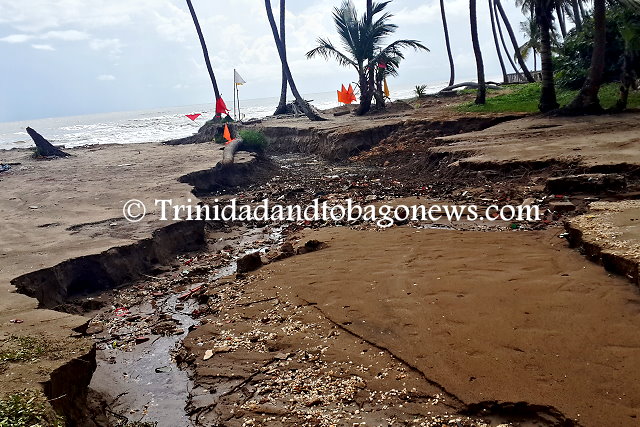 Efforts by residents to mitigate flooding on their properties in recent years have included placing boulders on the shore and pouring mounds of concrete into tire structures to form makeshift retention walls. Replanting of coconut trees in front of properties is also practiced. In fact, while there we observed one resident who was at the centre of the destruction at the largest break away of the road replanting a coconut tree in front his property. 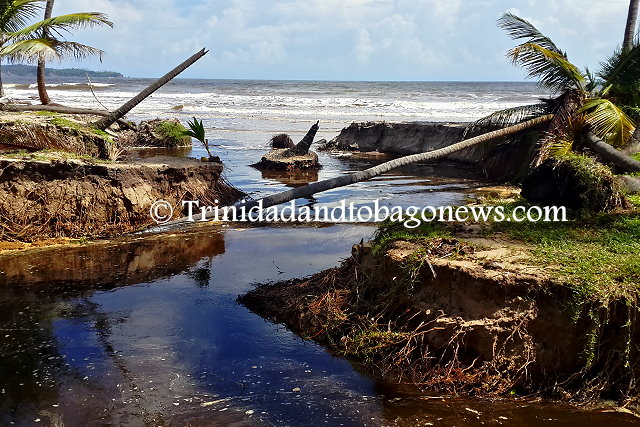 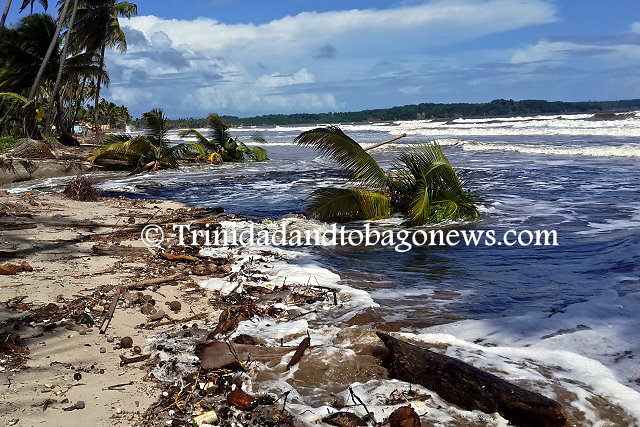 Coconut tree forests which are an important natural defence to coastal erosion have been rapidly declining on the Manzanilla stretch. Seen here are dead coconut trees.

With consistent rainfall during this week and the wet season still in full gear, the full destruction of the area may not have yet passed. Farmers have largely been unable to access and assess the damage to their agricultural fields on the Manzanilla/Mayaro Road. Further, the Ministry of Works and Infrastructure has indicated that they will not be able to assess the full extent of the damage to the road until the swamp has fully drained out. Active pumping of water from the area has been undertaken to quicken the pace of remediation and rehabilitation of this vital road. 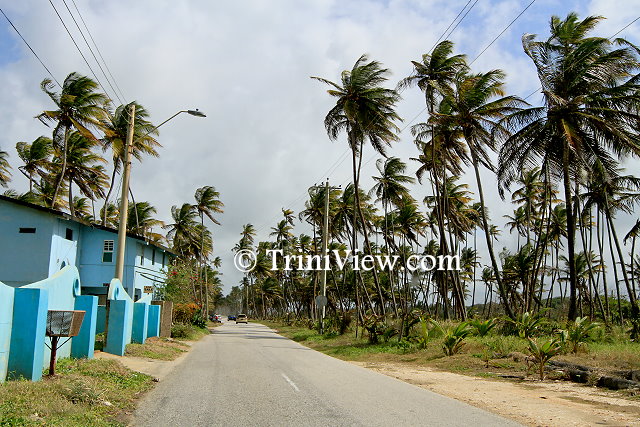 Flashback: site of one of three or four areas where the road is now completely destroyed

Theories about the best and most practical approach to accommodate commuters and residents but at the same time accommodating the natural processes occurring in the swamp have been frequently discussed over the last few days. As this road is closed, the main alternative routes from Sangre Grande to Mayaro and Guayaguayare are now the Southern Cunapo Road and the Rio Claro-Mayaro Road. The Southern Cunapo Road suffers frequent land slips and is over twice the distance of the Manzanilla-Mayaro Road. The closure of the road will no doubt affect the commuters associated with the oil, agriculture and tourism industries as well as schools and businesses for the rest of the year.

2 thoughts on “Flooding in Manzanilla”