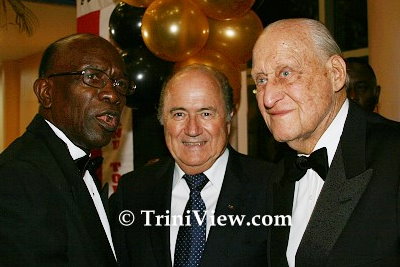 JACK WARNER’S close friend Dr Joao Havelange, 96, in whose honour the Centre of Excellence in Macoya was named, resigned in disgrace after a Fifa ethics committee found that Havelange — a former Fifa President — had taken bribes.

Brazilian-born Havelange’s resignation came on the heels of Warner tendering his own resignations first as Minister of National Security, then as UNC chairman and finally as the Member of Parliament for Chaguanas West after a Concacaf Integrity Committee report found him involved in the misappropriation of funds and slammed as “fraudulent their management”of the conduct of the soccer confederation’s affairs. Warner headed Concacaf for 20 years with American Chuck Blazer, who was also knocked in the report, serving as general secretary.

The Paraguayan was accused in the Fifa report of being “not fully candid” in his explanations over the affair.

However, while the report says that payments made in the 1990s to Havelange, who was Fifa president from 1974 to 1988, Leoz and former Fifa executive Ricardo Teixeira – Havelange’s son-in-law – qualified as bribes, it was a crime at the time.

The company collapsed with huge debts in 2001 and its arrangement with Fifa was subsequently investigated by Swiss authorities. Fifa was eventually forced by the Swiss supreme court to release documents relating to the case after it repeatedly attempted to block the release of the confidential papers.

Fifa president Sepp Blatter announced in July 2012 that Fifa’s new ethics committee would be looking at the bribery allegations. That investigation resulted in the release of the report yesterday.

“It is certain that not inconsiderable amounts were channelled to former Fifa president Havelange and to his son-in-law Ricardo Teixeira as well as to Dr Nicolas Leoz, whereby there is no indication that any form of service was given in return by them.

“These payments were apparently made via front companies in order to cover up the true recipient and are to be qualified as “commissions”, known today as ‘bribes’,” the report stated.

The report added that Havelange and Teixeira were “morally and ethically reproachable” for accepting the money. Leoz told investigators he donated the money he received to a school project — but only in January 2008. The report states payments were made between 1992 and May 2000.

Questions over Blatter’s conduct have also been raised in the past, but the report says there is no evidence he received money from the now-defunct ISL.

In response to the publication of the report, Blatter yesterday said: “I note in particular that, in his conclusions, chairman Eckert states that, “the ISL case is concluded for the Ethics Committee” and that “no further proceedings related to the ISL matter are warranted against any other football official”.

“I also note with satisfaction that this report confirms that President Blatter’s conduct could not be classified in any way as misconduct with regard to any ethics rules. I have no doubt that Fifa, thanks to the governance reform process I proposed, now has the mechanisms and means to ensure such an issue which caused untold damage to the reputation of our institution, does not happen again.”

Warner and Havelange have enjoyed an extremely close personal friendship that spanned over two decades at Fifa. Warner has said he was given money to build the Centre of Excellence in Macoya in return for helping Blatter’s election as president of Fifa.

Warner produced letters from Havelange, apparently showing the Fifa loan for the centre, built on land owned by Warner, had been converted into a grant. In return, Warner says he delivered the 30 votes needed for Blatter to beat Lennart Johansson for the Fifa presidency in 1998. The facility in Macoya was later named the Joao Havelange Centre of Excellence. Warner delivered 30 Concacaf votes for Blatter in a block – and he beat Johansson by 111 votes to 80.