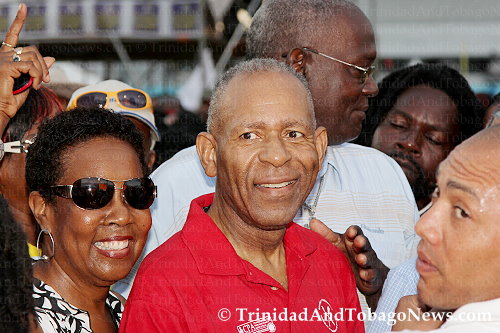 Former Prime Minister of Trinidad and Tobago and M.P for San Fernando East Patrick Manning along with his wife Hazel Manning walking through the crowd at the Calypso Fiesta during the recently concluded Carnival season.

Former Prime Minister of Trinidad and Tobago Patrick Manning, suffered a seizure and collapsed today while meeting with members of the public at his San Fernando East constituency. He was rushed to hospital where he currently remains.

Manning back in hospital
Former Prime Minister Patrick Manning is in hospital again after collapsing at his San Fernando East constituency office yesterday afternoon. Chairman of the South West Regional Health Authority Dr Lackram Bodoe said Manning was in a stable condition at the San Fernando General Hospital (SFGH) after being attended to at the Accident and Emergency Department