Newsday’s prime space columnist, George Alleyne continues to base his mistake-prone obsession on misleading argumentation for the re- imposition of property taxation (Newsday 1 Feb) when it is patently obvious that during the current economic down-turn, Government can and should stimulate consumer confidence and spending power by leaving as much resources in consumer hands and not in the coffers of Government.

I have previously indicated to Mr. Alleyne that it was the PNM Government of 2009/10 via Articles 55 and 56 of Act No. 18 of 2009 with undue haste suspended/repealed the 1948 Land and Building Tax Act and Part V of the 1990 Municipal Corporations Act – not the current PPG. Secondly, it was the PNM Government that refused to adjust property taxes upwards based on at least three updated Commissioner of Valuations Reports in 1969, 1976 and 2002 for political/electoral reasons. 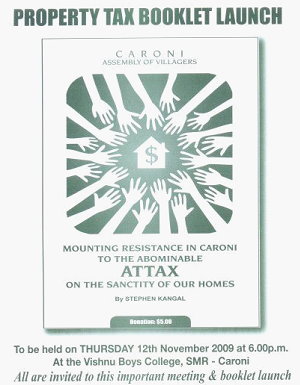 As one of the activists spear-heading the regime-changing “Axe The Tax” campaign our counter-arguments were ranged against the might of the Government. They were buttressed by invincible People’s Power and devoid of the benefit of state resources. They were well-worked out, consistent, compelling and so convincing that it singularly precipitated the demise of the PNM regime on 24 May 2010 and the eventual abolition of its punitive Property Tax Act mentioned above. “Powerful property interests” did not support the Axe the Tax campaign. It was the ordinary man/householder who sustained and fomented the opposition to the draconian fiscal measure on the basis of the theme of “No Taxation without Representation”.

Mr. Alleyne must be told that in T&T since the introduction of land and building taxes in the 1920’s the criterion of the potential prevailing rental values of lands/buildings has always been the determining factor for calculating these taxes – not the value of the property. Additionally the taxes levied on recently built new properties, contrary to what Mr. Alleyne imputed, have always been based on the prevailing rental values at the time of being completed and included in the rolls of the Warden’s Offices/City Halls. What Mr. Alleyne should be agitating for is the inclusion in the valuation rolls of the 250,000 new and improved commercial and residential properties that at present do not pay their share of property taxation before any attempt is made to impose additional taxes on the already over-taxed householders.