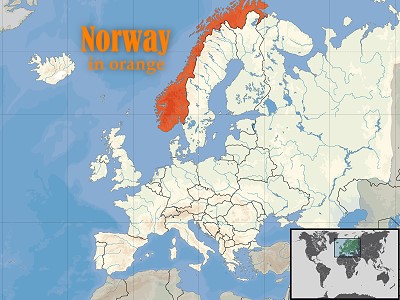 Norway (in orange) – Image from Wikipedia

ONE can easily learn to love Norway only for its majestic fjords that are almost unique to that country. But its beauty extends far beyond the landscape and seascape. Here’s a country that discovered oil off its coast at the same time Britain, Holland and others did in the North Sea. That was some 70 years after the first productive oil well was drilled in Trinidad. True, the quantities differed vastly: ours never exceeded 300,000 barrels per day (bpd), while Norway ranks 10th among oil producers at 3.2 million bpd. Its reserves are also far bigger than ours, both in oil and gas.

But so are its size, its population, its climate challenges, with its northern extremities lying in some of the most hostile conditions. Long before oil propelled it into big bucks, it had harnessed hydro-electricity to the extent it could afford to sell power to neighbouring Sweden and Finland. I was in the Lapland region of Finland a few years ago, fascinated by this vast landscape of snow, ice and forests. I observed power lines crossing the area near the town of Ivalo, and I wondered where the electricity came from. Surely, it could not be from way south in Helsinki. “No,” my host said. “Power in this part of Finland comes from Norway.”

In fact, Norway first make its mark with the exploits of the Vikings, but hard on the heels of these feared Nordic warriors came a thriving fishing industry that survives to this day, and makes up a significant part of the country’s revenue. From fishing and boat-building (that evolved into a reputable ship-building industry), Norway moved into the fast-forward mode after the discovery of oil. But unlike so many other oil-producing countries that wallowed in wealth as the “black gold” flowed, the Norwegians remained frugal in dealing with their new circumstance.

Its government and citizens eschewed the ostentatious lifestyles that the Arabs adopted. According to a recent Time magazine article: “The historic commodities boom that we are living through now shows that the Dutch disease is just as often absent from resource-rich countries as it is present. The key is governance.” Pause. Think. It’s not a matter of how much oil or gold or gas you have, although it might be good to have such resources. Time: “Some of it, as Norway has shown, is just straightforward economic fundamentals: sound monetary policy, open trading and investment regimes. Enforced laws against corruption are basic.”

Huh? Sure, we have similar laws in T&T. But when last was any “big boy” brought to justice for being corrupt? And corruption here did not start with the UNC in government. It goes as far back as during colonial rule, but took Concorde-like flight when the first oil boom hit us “like a dose of salts” (Michael Manley’s words) in 1973. Doug Saunders of the Globe and Mail wrote: “While other countries have become apathetic and uncompetitive during petroleum booms, Norway appears near the top of every international index of competitiveness and entrepreneurship.

“Yngve Slyngstad, 47, is the manager of the Government Pension Fund-Global, better known as ‘the oil fund.’ An adjoining room contains computer desks staffed by his 11 traders, who invest the $1 billion in oil money his office receives every week. In exchange for the right to drill, they must hand 78 per cent of their profit over to Mr Slyngstad’s fund.

This is Norway’s long-term savings account, and in the 17 years since it was launched it has become one of the four largest investment funds in the world. It currently holds $368.2-billion, or $78,351 for each Norwegian citizen.”

Saunders continued: “The Management Rule is the heart of Norway’s economic miracle. It is a profound act of self-discipline: all but four per cent of Norway’s oil earnings must be placed in the fund for savings; nothing can be withdrawn from the fund until the oil is gone, decades from now; and-most crucially-absolutely none of the money can be invested inside Norway.”

Double “Huh?” “Even as oil has soared, Norway has avoided high inflation and its non-oil companies have grown more competitive. Only about 10 per cent of Norway’s $70-billion government budget comes from oil money. In order to finance their generous state services and social benefits, Norwegians’ income taxes are among the highest in the world, and their gas stations charge $2.30 for a litre of unleaded-the highest price in the world, in a country that is the world’s third-largest exporter of the stuff.”

I see the glint of 3-canals-aplenty bearing down on me: Shah want we to pay US$2.30 per litre for gas? Take him out! Wooo! I never suggested as much. I’m only showing what can be achieved with visionary leadership, a disciplined people, and high-officials who will not dip their paws in the national cookie-jar. I can write much more on the Norwegian model. But I have space only for this: with five million people, murders topped a whopping 49 last year! And there are 2,900 prisoners in the country’s jails.