Method
Start in 17th and 18th century
First, uproot people from their homeland
Enslave them or otherwise press them into demeaning service
Then ignore them until a rich and powerful country wants their land
Next, turn your beady eye on this land, viewing the human inhabitants as an inconvenient weed on potentially lucrative real estate
Weed the natives out, referring to them as “Tarzan and Man Friday“, thus playing up racist stereotypes of savages who should be divested of their land because you are better at exploiting it.
Then lease the island to the rich and powerful nation in exchange for an 11 million pound discount on Polaris missiles.
Then lie about it all.

These are the bare bones. Now, let’s flesh it out. 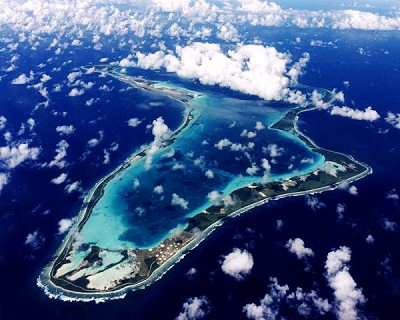 I have often felt that the legendary British stiff upper lip, at least insofar as the dealings of many British governments with their colonies are concerned, is kept so by a determination to prevent the truth, or an acknowledgement of the fundamental immorality of their situation, from ever coming out. But thank God for the Internet.

It all started with the cold war, that interesting non-conflict of elephants whose victims were the field mice who had no interest in the conflict.

No, actually, it did not. It started with the slave trade and colonialism and using human beings as farm animals.

Let us traipse lightly across the decades, though, because we all have at least a general idea of what happened during that time.

The US wanted a military base, and the Brits had islands to lease. The US cast its covetous eyes on Aldabra Island, near Madagascar. But there was a hitch. The island was the breeding ground for rare giant tortoises. We all know how het-up conservationists can get when animal habitats are threatened. The powers did not want het-up conservationists making heated pronouncements about tortoises. People are much more likely to take note if a moth, a tortoise or a fruit bat is in danger. They are less likely to worry about the eviction of a few blacks, especially if public opinion is shaped to view them as a few savages recently settled on prime land.

So the Chagos Islands were chosen. There was a further administrative matter to deal with. Prior to granting independence to Mauritius (although one wonders how independent that country can be if one observes that it was one of the few to come out in support of Paul Wolfowitz), it was important to sever the Chagos islands from that nation so that it would be easier to draw and quarter it. Former colonies will remember the nation-wrecking proclivities of British governments.

Anyway, snip, snip, snip went the British government, like Caligula with garden shears. Snip snip. So much of British colonialism reminds one of a Roman emperor gone mad.

Thus, between 1967 and 1973, 2000 islanders were moved to Mauritius, where they now live, except for a hundred or so settled near Crawley in England. The islanders got British citizenship, a development viewed by some as better than going to the Christian heaven. This measure that gave them citizenship, the Immigration Ordinance of 1971, gave the Brits the legal backing to allow the US to build its bases on Diego Garcia, the biggest of the Chagos islands.

The US used their military base for warmongering, as expected. They used it in Gulf War I, Afghanistan, and Gulf War II. Fancy dispossessing people so their land can be used as a springboard for killing more people!

The islanders bless them, have not sat and moaned. They have fought the British government in British courts.

The British government, as most former colonies will tell you, can be a formidable adversary.

One of its initial salvoes was to make an order using the Royal Prerogative. This basically means that you can make an order on behalf of the sovereign without necessarily telling him/her about what it entails. This sounds very dangerous, and it is. It reminds us of the sort of things “banana republics” do. But a judge who dealt with the case said the minister who invoked the royal prerogative had misused power in doing so because:

Indeed, the Crown may be doing something that – if she only knew the true position – she would prefer not to do, and yet it is then said that the Government can hide behind the Crown’s prerogative

Time passed. In 2000, the British government first lost its case in the High Court. The government then said that a feasibility study needed to be conducted prior to allowing the islands to return. What kind of feasibility study do you need to return to people land that you stole from them?

American authorities, however, expressed the concern that if Diego Garcia were returned to its owners, their security would be in danger (no paranoia there!). So the British government, once more preferring the friendship of the most powerful to the human rights of the less so, did an about turn and marched smartly backwards to its previous position. The island was not to be returned. People could not live on Diego Garcia.

But in May this year, the High Court decided that it was “repugnant” to exile people like that.

So now the Chagossians can go back. Says a euphoric article in the l’Express of Port Louis:

“This victory of the Chagossians is the proof that everything is not only a matter of power. The little Chagossians did not hesitate to challenge a big power as Great Britain because they felt they were victims of an injustice and they were indeed right to do so.”

However, as the writer of the article admits, “Britain will fight tooth and nail to keep the Chagos archipelago.” We saw that with the Falklands/ las Malvinas, depending on whose side you’re on.

The writer in L’Express thinks that it bodes well for small peoples struggling against strong and soulless governments.

I agree. Many of us have become cynical about our ability to influence things that may cause us harm and even death. People feel that governments are uncontrollable and are too lethargic or terrified to even attempt the task. Shall we then give up and let them mess us about? Shall we accept our imposed role as pawns in the games of nations and power blocs?

No. Ants are tiny things, but anyone who has ever been foolish enough to attack a column of driver (or “soldier”) ants knows that when acting in concert, small animals can be very dangerous.

Besides, silence is consent.

Reprinted with consent of the author from:
www.ekosso.com/2007/07/the-chagos-isla.html

One thought on “The Chagos islands: the British government’s recipe for dehumanisation”