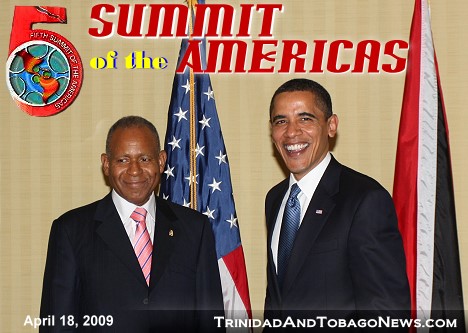 Summit plagued by disorganisation
US PRESIDENT Barack Obama opted out of posing for an official photograph for the Fifth Summit of the Americas when it was taken yesterday as several heads of State skipped the symbolic act amidst chaos at the Prime Minister’s Diplomatic Centre in La Fantasie, St Ann’s.

A summit in shambles
The Fifth Summit of the Americas has come and gone, and after all the pomp and ceremony, delegates and foreign journalists have come to one conclusion: it has been a mess. After going to five Latin American countries, earlier this month, to whip up support, Prime Minister Patrick Manning was the only leader to sign yesterday the document, the Declaration of Port-of-Spain.

Obama goes to bat for Democracy
Braving the fierce midday sun on the deck of the Hilton overlooking the Queen’s Park Savannah, US President Barack Obama outlined his foreign policy principles, placing a high value on the promotion of democratic practices such as freedom of speech and religion which he described as universal values.

Panama in line to host next Summit

Cabrera not happy as protesters blocked

Obama denies US plot to kill Bolivia’s Morales
Violent overthrows of democratically elected leaders will not be supported by the United States, the country’s President, Barack Obama, said yesterday in response to claims by Bolivia President Evo Morales that Americans are behind a plot to kill him.

PM: We all want Cuba back

Jagdeo to US: Lift Cuban embargo to keep goodwill

Jagdeo sees region lagging
Guyana’s President Bharrat Jagdeo says the region needs bold and big initiatives to catapult the area, not mundane, evolutionary hundred years transformation. “There are too many illiterate people and too much poverty for the region to remain competitive.

Now the numbers
Now that the Fifth Summit of the Americas is over, it is time to do an accounting. And we do not mean just the monetary kind.