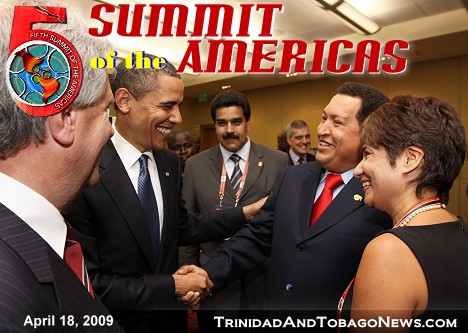 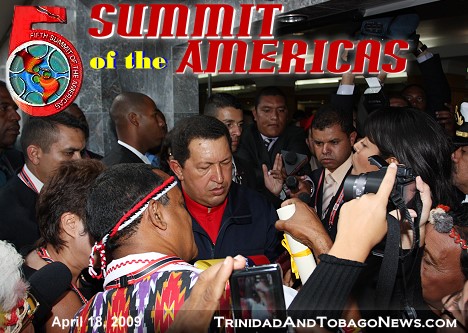 Waiting in vain for Obama
Disappointment

Obama slips through spectators fingers
Scores of journalists and other accredited people were disappointed yesterday after having waited for hours to catch a glimpse of US President Barack Obama upon his arrival at the Hyatt Regency hotel in Port-of-Spain for the start of the Summit of Americas. However, he was sneaked through a back entrance of the hotel.

Obama: Time for a new start
UNITED States President Barack Obama said he wants a new beginning in US-Cuba relations, but is also serious in wanting to address human rights issues in Cuba…

We’ll mediate
CARICOM leaders were last night due to act as virtual mediators between US President Barack Obama and Venzuelan President Hugo Chavez on the issue of Cuba, after Caricom leaders indicated they will not join Chavez in vetoing the Declaration of Port-of-Spain.

Manning: Let’s be friends
PRIME Minister Patrick Manning yesterday urged leaders at the Fifth Summit of the Americas not to become divisive over any one issue during their talks, a likely reference to the Cuban issue, as he addressed the opening ceremony of the meeting at the Hyatt Regency Hotel, Port-of- Spain last evening.

Summit protestor spends night in jail
ENVIRONMENTALIST Michael Parris spent Thursday night behind bars in the Couva Police Station after he was arrested by police for erecting placards on TTEC poles to protest against the Summit of the Americas currently taking place in Port-of-Spain.

A free world
The final statement from the Summit of the Americas is still to be drawn up, but we doubt that it will include measures to end capitalism and the “neo-liberal system”.