AMIDST Opposition claims that photos exist of persons resembling children of top Government officials holding firearms resembling those commonly used by the Defence Force, Attorney General Faris Al-Rawi could not ascertain if those featured in these photos are his children, but admitted members of his family have undergone “threat assessment” training at Cumuto Army Base as part of security protocols for families of State officials deemed to be at high risk.
END_OF_DOCUMENT_TOKEN_TO_BE_REPLACED 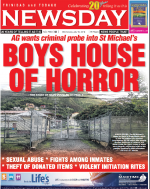 AGHAST at what he has found in the death of a boy incarcerated at the St Michael’s Home for Boys in Diego Martin, Attorney General Anand Ramlogan yesterday announced he has called on the Acting Commissioner of Police Stephen Williams and Director of Public Prosecutions (DPP) Roger Gaspard to launch criminal investigations into the operations of this Home.

Among the startling revelations is that a female worker took a young male from the Home to her home. She later became pregnant and has since given birth to a baby, believed to have been fathered by the underaged inmate.
END_OF_DOCUMENT_TOKEN_TO_BE_REPLACED

The Society wrote to media houses to support the Evidence (Amendment) Bill 2010, under debate in the Senate, which makes it easier for victims of sexual abuse to testify in law-courts.
END_OF_DOCUMENT_TOKEN_TO_BE_REPLACED

Enill scotched previous reports that only ten MPs were backing Rowley, amid claims that Diego Martin North East MP Colm Imbert was not supporting Rowley but was himself seeking to become Opposition Leader. Enill said a letter with the names of all 11 of Rowley’s colleagues was sent yesterday to President George Maxwell Richards, indicating support for Rowley to become Opposition Leader.
END_OF_DOCUMENT_TOKEN_TO_BE_REPLACED