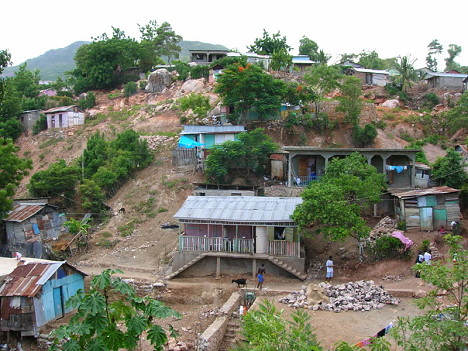 It certainly does — even under the “enlightened” foreign policy of Barack Obama. As John Caruso reports (in separate pieces in A Distant Ocean and A Tiny Revolution), Obama and his “superstar” secretary of state, Hillary Clinton, are loudly championing the latest egregious, brutal farce that Washington and the West have foisted upon the uppity natives of Haiti.

Senatorial elections held this month by the government imposed on Haiti after the U.S.-backed coup of 2004 (more on this below) produced a turnout of less than 10 percent of eligible voters: a result that mocks any notion of a popular, legitimate democracy. But this is not because the Haitians are so lazy and disinterested that they couldn’t be bothered to vote. Nor that they are so satisfied with the benevolent, paternal care of their American-appointed masters that they saw no need to let silly electoral contests trouble their bucolic life.

No, the 90 percent refusal rate was in fact a massive protest action, driven chiefly by the fact that the American-backed government would not allow the most popular party — the party of the government ousted by the 2004 coup — to run a slate of candidates in the election. By clerkly hook and bureaucratic crook, Haiti’s election overseers banned the Fanmi Lavalas slate back in February. At that moment, the April elections became a dead letter, a meaningless farce — yet another cruel joke played on the people of Haiti.

How did the enlightened progressives of the new American administration respond? Caruso reports:

CLINTON: The U.S. removed a military dictatorship in 1995, clearing the way for democracy. And after several years of political disputes, common in any country making a transition, Haiti began to see progress. And the national and presidential elections in 2006 really moved Haiti’s democracy forward. What the president and the prime minister are seeking is to maintain a strong commitment to democratic governance which will take another step forward with elections for the senate on Sunday.

To translate from the vulgar Clintonian dialect: 1) “political disputes” refers to the overwhelmingly popular presidency of Jean-Bertrand Aristide, which was “disputed” (and continually undermined) by the U.S. and its fifth column in Haiti; 2) Haiti “began to see progress” thanks to the U.S.-backed coup of Aristide in 2004; and 3) the 2006 elections that “really moved Haiti’s democracy forward” excluded both Aristide and FL’s preferred candidate in his stead (Father Gerard Jean-Juste, thrown in prison on invented charges by the U.S.-backed government in order to prevent him from running), resulting in the ascension of Rene Preval—who understands clearly who’s the boss, and therefore merits a pat on the head from Clinton.

Which brings us to today’s senatorial elections, in which the U.S./Haitian “strong commitment to democratic governance…will take another step forward” via the calculated suppression of the majority party’s ability to run a slate of candidates…

So the centuries-long U.S. project of democracy prevention in Haiti is still going swimmingly. And anyone who feared that our first black president might be less sympathetic to the need to smash the democratic aspirations of the first free black nation in the hemisphere can rest assured: Obama will never let race—or anything else—stop him from doing the empire’s dirty work.

(Of Obama’s essential, political and philosophical whiteness — which renders his “continuity” on Haiti even less surprising — see Arthur Silber here.)

How did we get to this point? As noted, it is a long story — two hundred years long, in fact. But the immediate situation was largely created by the 2004 coup, in which the Bush Administration brought to fruition the destructive policies first set in train by the current secretary of state’s husband, Bill Clinton. (There’s that “continuity” of the American political class again!). Here’s how I told the tale in a piece for CounterPunch way back when in “Operation Continuing Sweatshop“:

This week, the Bush administration added another violent “regime change” notch to its gunbelt, toppling the democratically elected president of Haiti and replacing him with an unelected gang of convicted killers, death squad leaders, militarists, narcoterrorists, CIA operatives, hereditary elitists and corporate predators – a bit like Team Bush itself, in other words.

Although the Haiti coup was widely portrayed as an irresistible upsurge of popular discontent, it was of course the result of years of hard work by Bush’s dedicated corrupters of democracy, as William Bowles of Information Clearinghouse reports. Bushist bagmen funded the political opposition to President Jean-Bertrand Aristide, smuggled guns to exiled Haitian warlords, and carried out a relentless strangulation of the county, cutting off long-promised financial and structural aid to one of the poorest nations on earth until food prices were soaring, unemployment spiked to 70 percent, and the broken-backed government lost control of society to armed gangs of criminals, fanatics and the merely desperate.

Meanwhile, Haiti was forced to pay $2 million a month on debts run up by the murderous U.S.-backed dictatorships that had ruled the island since the American military occupation of 1915-1934. The Haitian press, controlled by cronies of the former dictators, supplied the lazy American media with reams of stories about Aristide’s “tyranny.” These were swiftly followed by thunderous denunciations from the Bush Regime. Wholesale murders of government officials and Aristide partisans by Bush-backed opposition gangs were, of course, demurely ignored — as were Aristide’s own condemnations of violence by his supporters. The old reliable “madman” trope was also brought out for an airing, with constant press drumbeats about Aristide’s “mental instability.” (America’s designated targets are always “deranged monsters,” although sometimes, when they prove politically useful again, they miraculously recover their wits, like Libya’s Moamar Gadafy.)

The ostensible reason for Bush’s deadly squeeze play was Haiti’s disputed elections in 2000. That vote, only the nation’s third free election in 200 years, was indeed marred by reports of irregularities — although these were not nearly as egregious as the well-documented hijinks which saw a certain runner-up candidate appointed to the White House that same year. There was no question that Aristide and his party received an overwhelming majority of legitimate votes; however, out of the 7,500 offices up for grabs, election observers did find that seven senate results seemed of dodgy provenance.

So what happened? The seven disputed senators resigned. New elections for the seats were called, but the opposition — two elitist factions financed by Washington’s favorite [bipartisan] engines of subversion, the Orwellian-monikered “National Endowment for Democracy” and “International Republican Institute” — refused to take part. The government broke down because the legislature couldn’t convene. When Bush came in, he tightened the screws of the international blockade of the island, insisting that $500 million in desperately needed aid could not be released unless the opposition participated in new elections — while he was simultaneously paying the opposition not to participate.

The ultimate aim of this brutal pretzel logic was to grind Haiti’s destitute people further into the ground and destroy Aristide’s ability to govern. His real crime, of course, was not the Florida-style election follies or the reported “tyranny.” Are you kidding? Bush loves that stuff — witness his eager embrace of the nuke-peddling dictatorship of Pakistan, the human-boiling hardman of Uzbekistan, the torture-happy tyrant of Kazakhstan, the drug-running warlords of Afghanistan, and so forth.

No, Aristide did something far worse than stuffing ballots or killing people — he tried to raise the minimum wage, to the princely sum of two dollars a day. This move outraged the American corporations — and their local lackeys — who have for generations used Haiti as a pool of dirt-cheap labor and sky-high profits. It was the last straw for the elitist factions, one of which is actually led by an American citizen and former Reagan-Bush appointee, manufacturing tycoon Andy Apaid.

Apaid was the point man for the rapacious Reagan-Bush “market reform” drive in Haiti. Of course, “reform,” in the degraded jargon of the privateers, means exposing even the very means of survival and sustenance to the ravages of powerful corporate interests. For example, the Reagan-Bush plan forced Haiti to lift import tariffs on rice, which had long been a locally-grown staple. Then they flooded Haiti with heavily subsidized American rice, destroying the local market and throwing thousands of self-sufficient farmers out of work. With a now-captive market, the American companies jacked up their prices, spreading ruin and hunger throughout Haitian society.

The jobless farmers provided new fodder for the factories of Apaid and his cronies. Reagan and Bush chipped in by abolishing taxes for American corporations who set up Haitian sweatshops. The result was a precipitous drop in wages — and life expectancy. Aristide’s first election in 1990 threatened these cozy arrangements, so he was duly ejected by a military coup, with Bush I’s not-so-tacit connivance.

Bill Clinton restored Aristide to office in 1994 — but only after forcing him to agree to, yes, “market reforms.” In fact, it was Clinton, the privateers’ pal, who instigated the post-election aid embargo that Bush II used to such devastating effect. Aristide’s chief failing as a leader was his attempt to live up to this bipartisan blackmail. As in every other nation that’s come under the IMF whip, Haiti’s already-fragile economy collapsed. Bush family retainers like Apaid then shoved the country into total chaos, making it easy prey for the warlords whom Bush operatives — many of them old Iran-Contra hands — supplied with arms through the Dominican Republic, the Boston Globe reports.

When Aristide called for an international force to stem the terrorist attack, Bush refused. When Aristide agreed to a deal, brokered by his fellow leaders in the Caribbean, that would have effectively ceded power to the Bush-funded opposition but at least preserved the lineaments of Haitian democracy — Apaid and the boys turned down the offer, with the blessing of their paymasters in Washington, who suddenly claimed they had no influence over their recalcitrant hired hands. When Aristide asked for American protection as the rebel gang closed in on the capital, Bush refused.

Instead, Aristide was told by armed American gunmen that if he didn’t resign, he would be left to die at the hands of the rebels. Then he was bundled onto a waiting plane and dumped in the middle of Africa. Within hours, the Bush-backed terrorists were marching openly through Port-au-Prince, executing Aristide’s supporters.

Oh, why was I so sarcastic in those days? Obviously, America’s actions in Haiti during this decade have been “an extraordinary achievement,” just like our helping hand in Iraq. All the ruin, all the killing, all the suffering and oppression — it’s all just a big step forward in America’s “strong commitment to democratic governance” in Haiti.

Articles on the 2004 Haitian Coup

5 thoughts on “Cry, the Unforgiven Country: Obama’s ‘Continuity’ in Haiti”