Haiti, I am sorry
We misunderstood you
One day we’ll turn our heads
And look inside you…

About 22 years ago I was a part of a New England delegation that travelled to Haiti to demand that Jean-Bertrand Aristide, the first democratically elected president of Haiti after years of dictatorship, be allowed to assume the office he had won fairly and squarely.

We met with the United States Ambassador to Haiti, but nothing came of it. Our pleas, like so many others, were like voices crying out desperately in a wilderness of deceit and deception.
END_OF_DOCUMENT_TOKEN_TO_BE_REPLACED 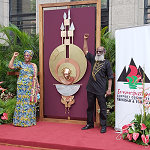 Like many thousands of other Trinbagonians, I missed the commemorative spectacles of the longest day in the Pan-African Festival’s calendar. But instead of regrets, the occasion motivated me to reexamine the intellectual underpinnings and contradictions of Britain’s 1833 Abolition of Slavery Act.
END_OF_DOCUMENT_TOKEN_TO_BE_REPLACED

(The writer is Antigua and Barbuda’s Ambassador to the United States and the OAS. He is also a Senior Fellow at the Institute of Commonwealth Studies at the University of London and Massey College in the University of Toronto. The views expressed are his own)

The effect of the inappropriate depiction of Haiti, El Salvador and all African nations as “shit hole” countries is a matter that the people of the United States of America and their government and Congress should contemplate seriously.
END_OF_DOCUMENT_TOKEN_TO_BE_REPLACED

Why does the US owe Haiti Billions? Colin Powell, former US Secretary of State, stated his foreign policy view as the “Pottery Barn rule.” That is – “if you break it, you own it.”

The US has worked to break Haiti for over 200 years. We owe Haiti. Not charity. We owe Haiti as a matter of justice. Reparations. And not the $100 million promised by President Obama either – that is Powerball money. The US owes Haiti Billions – with a big B.
END_OF_DOCUMENT_TOKEN_TO_BE_REPLACED

At the outset, it must be stated quite equivocally that the order for the global apology for the European enslavement of Afrikans is as follows: The Roman Catholic Pope of Rome, first; second, the governments of Spain and Portugal; in third place are the governments of Britain, France and the Netherlands; in fourth place is the government of the United States.
END_OF_DOCUMENT_TOKEN_TO_BE_REPLACED

The earthquake devastated Haiti in January 2010 killing, according to Oxfam International, 250,000 people and injuring another 300,000. 360,000 Haitians are still displaced and living hand to mouth in 496 tent camps across the country according to the International Organization of Migration. Most eat only one meal a day.
END_OF_DOCUMENT_TOKEN_TO_BE_REPLACED

August and anyone who is anyone has left Paris (and other Europeans cities) for the country for vacation. As one looks at the shuttered apartment windows, the empty streets (except for places such as Champs Elysees Avenue) and the barely-filed cafes that inundate the city and its sidewalks one realizes that everything will remain in abeyance until September when Parisians return to work and attend to their business again.
END_OF_DOCUMENT_TOKEN_TO_BE_REPLACED

Haitians will defend their sovereignty By The Real News
Ronald Charles: This way of providing aid is a way to humiliate us and many Haitians will not accept it.
END_OF_DOCUMENT_TOKEN_TO_BE_REPLACED

BEFORE the Herculean task of reconstructing Haiti can begin, the current relief programme must reach every Haitian. It must first ensure that all those who suffered physical and mental trauma during and after the earthquake are properly treated. Last week I made reference to amputations being done with hacksaws and without anaesthetic. Hello! Anaesthesia was introduced in the mid-19th century! The US military has large numbers of field hospitals equipped a wide range of medications to meet such emergencies. Where were they?
END_OF_DOCUMENT_TOKEN_TO_BE_REPLACED

Sending in the Marines

THE FRENCH COOPERATION Minister Alain Joyandet accused the U.S. of “occupying” Haiti rather than helping in the wake of the devastating January 12, 7.0 earthquake. Doctors Without Borders and officials from the Caribbean community expressed similar frustrations, as US military personnel controlling the airport turned away their planes. With just under 20,000 U.S. boots on the ground in Haiti or just off shore, the U.N. military force has augmented its numbers to around 12,000. Still, more than two weeks after the disaster, Haitians lack water, food, medicine, shelter and equipment to dig out those that may still be alive under the rubble.
END_OF_DOCUMENT_TOKEN_TO_BE_REPLACED