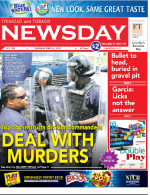 Newsday was told by senior police sources that Commissioner Williams yesterday mandated all divisional commanders, Police Secton heads and task force units to put together a ‘priority offenders list’ and target persons, who according to intel, have been engaging in continuous criminal activities.

Division heads were also instructed to find ways and means of reducing the amount of murders, shootings and woundings committed in their respective divisions.

The meeting of all divisional heads, head of sections and units was called by Commissioner Williams, following last week’s launch of the 2016 anti-crime initiative.

Newsday understands all Divisions will use the priority offenders list to target persons who are known repeat offenders, persons suspected of being involved in criminal activities, persons already before the courts and persons on outstanding warrants. Newsday understands that apart from the priority offenders list, officers have been asked to seek and flush out others who may not be on the list, but who have been identified as persons intent on breaking the law.

At the meeting yesterday, divisional commanders using Computer Statistical Reporting, were able to review their progress in crime fighting as well as measure their detection rate in order to implement measures for improvement.

The officers were also addressed yesterday by other executive members of the Police Service.

A source told Newsday that Acting Commissioner Williams is very concerned about the spate of murders and is also concerned over the amount of crimes in which guns are used. He has asked that all heads set a specific target in terms of removing illegal firearms and ammunition from their divisions.

One thought on “DEAL WITH MURDERS”