By Analysis by Rickey Singh
May 15, 2011 – trinidadexpress.com 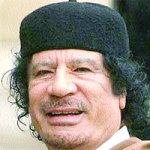 LAST WEEK, while the United Nations humanitarian aid chief, Baroness Valerie Amos, was pleading for at least a pause in hostilities in Libya to help “ease the humanitarian crisis”, NATO’s Secretary General, Anders Fogh Rasmussen, was arrogantly boasting — amid continuing bombing strikes — that President Moammar Gadaffi’s “days are numbered… There is no future for him or his regime…”

Well, since the Caribbean Community has finally broken its silence on the United States-led NATO war on Libya, perhaps it should at least seek a clarification from the UN Secretary General about the “mandate” by which NATO is currently intensifying its bombing raids to end “the future of Gadaffi and his government.”

Western double standards in its war to rid Libya of the dictatorial regime in Libya, when compared with the spreading uprisings in the Middle East/North Africa region, for democratic governance, has long been noted by scholars and informed commentators and organisations in the USA, Britain and Europe.

But for all the killings and repression by state security/military personnel in those countries, it is on Gadaffi and Libya’s future that the US and its NATO allies remain focused for “regime change” by the use of military force under the pretext of “protecting civilians.”

So, will Caricom move from its recently stated position in favour of a negotiated settlement to the Libyan crisis and enquire of the UN Secretary General as to whose mandate is really being enforced by NATO in Libya to “get rid of Gadaffi”? That certainly was not a stated objective of the original “no fly zone” resolution the US and its NATO allies managed to secure from a divided UN Security Council.

It took some six weeks, after the start of the ferocious bombing strikes against Libya by the USA and its NATO allies before the Caribbean Community summoned the courage to let the people of our region—among the world’s poor and powerless—know where it stands on this very bloody conflict that cries out for a principled negotiated political solution. Better late than never.

And when Caricom Foreign Ministers issued their statement just over a week ago on the Libyan crisis, following a regular meeting in St Kitts and Nevis, they opted to endorse—some say took ‘shelter’ behind—the position earlier enunciated by the African Union (AU) with which our Community has an ongoing working relationship.

The AU which, incidentally, had its inauguration in 1999 in the hometown of the embattled Libyan President, Maommar Gadaffi, had called for an immediate halt to the NATO bombing raids. Some have resulted in deaths.injuries and destruction for both the anti and pro-Gaddafi forces. The AU, and also the Arab League, has called for a negotiated political, not military solution.

In their own assessment of the deepening Libyan crisis since 10 of the 15 permanent members of the United Nation Security Council approved a “no fly zone” resolution to “protect civilians”, Caricom Foreign Ministers have urged a speedy negotiated resolution that “would reflect the legitimate demands and aspirations (read that to involve respect also for democratic governance and national sovereignty) of the Libyan people…”

Those among us in this region — where self-contempt runs deep, and who are ever so willing to side with the wealthy and mighty western powers—may cynically remark: ‘Who cares about Caricom’s stand on Libya? After all Caricom has no economic or political clout of any significance!

They may even scoff at the AU’s plea for an end to bombings and ALSO expediently ignore that the US-led NATO war game in Libya is for “regime change”—getting rid of Gadaffi and his government.

It is, perhaps pertinent for our region’s governments and institutions to keep in mind a well known observation of the late William Demas, that outstanding political thinker and doyen among West Indian economists. He passionately felt that neither geographical size nor economic resources should deter this region from taking principled stand on issues of international importance, particularly in relation to sovereignty and the rule of law.

In the context of the current Libyan crisis, “regime change” in Tripoli, remains the core factor in the waging of an unauthorised war under the pretext of “protecting civilians”. It is also being viewed as a brazen display of abuse of political/military power inconsistent with the rule of law.

Caricom, therefore, now has a moral obligation to at least use its limited resources to help in mobilising support—along with countries of the African Union and Arab League—in backing the call earlier this week for a pause in the bloody conflict. It came from the United Nation’s aid chief to the UN Security Council on why it is essential to have an immediate cessation in bombardment in Libya in order to ease a worsening humanitarian crisis

Even as the Guyana-born former cabinet minister in the Labour Party administration of ex-Prime Minister Tony Blair was making her plea, there were media reports of hundreds more non-combat civilians — Libyans and migrant workers — drowning at sea in their desperate attempts to flee from the ‘war games’ in which Libya is now gripped.

In contrast to the UN official’s assessment, NATO’s Secretary General, Rasmussen, a former prime minister of Denmark, has been talking tough , declaring that Gadaffi should realise, sooner rather than later, there’s no future for him or his regime…” Since the UN Security Council’s “no fly zone” resolution in March, there have already been some 6,000 NATO military missions to Libya that have resulted in thousands of deaths of Libyans and migrants working in that North African state with which Caricom countries have long established diplomatic and cultural relations.

The US-engineered 2003 war on Iraq to get rid of the Saddam Hussein dictatorship should not become the guiding /example for “regime change” in Libya — or any other nation.

Right now, after the initial “breaking news” by President Barack Obama on the circumstances of the killing of Osama bin Laden, his Attorney General, Eric Holder, has been pushed on the defensive by leaked reports to deny that the death of the Al Qaeda leader was “not an act of assassination”.

Well, while it would be unwise to rush to the defence of those who preach and practice terrorism, the fact, as earlier officially claimed by the Obama White House, is that bin Laden was not armed when he was fatally shot in the head.

Further, no proof has yet been offered that the notorious Al Qaeda leader resisted arrest when confronted by the US special force that went to Pakistan to “take him out” — dead or alive. So, was his authorised “killing” an act of “murder”? And how should that kind of “murder” be differentiated from an “assassination”?

Source: Question for Caricom on, Nato’s ‘war’ in Libya