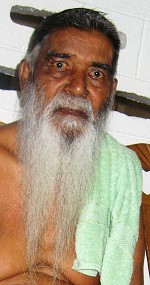 We all know Bull the fighter. But I want to share a reminisce starting with my knowledge of him as a little boy right through to knowing him as a fighter for workers in Trinidad and Tobago. As little children he was part of the community of elders, in the sense of adults. Pointe-a-Pierre residential consisted of Hill, the two lanes, Poui and Railway avenue and later on Plaisance Park. Beaumont Hill was 10 minutes walk from Plaisance Park. You had to pass the lanes/avenues to get there and Auckington was the main playing ground.

Many an evening, we as little children would see this man with a long beard and wearing a blue shirt standing at the roadside awaiting transport.

Pointe-a-Pierre government school was where we all went. The term catchment area had not been invented yet but we formed it which meant that we knew “Big Boy”, Margaret and all his children. The Lalchans, Jordans, Thomases, Mr. Martin, Marajs were who formed the community.

Several of the O.W.T.U. field commanders lived in the area: Chicken, Mr. Callender, Gregory James, Mr. Patterson, to name a few. To know them was to know Bull, for we all knew that in the field he was the voice, the spirit.

My father was the school headmaster then who taught private lessons to the children of the ex-pats. (Stephen Ames could not care less about curriculum). They lived in the fields and one had to pass through the gate to get there. During strikes, Bull was the one who decided if he could go into the fields to teach. I don’t think he understood how critical those struggles were to Trinidad and Tobago’s development.

In later years, through my own involvement in the Union, especially with the Vanguard, I would get to know him better. Bull would tell me stories of how they conducted struggle and all I could think is, “These guys were really brave.” He would tell me stories of the “underground” which forever changed my perception of mild-mannered comrades whom I saw in the building. The word Hamas had not been invented yet but, hmmm…

Bull remained part of the Pointe-aPierre landscape as much the Red Bridge. As I grew older and spent more time around the Union, I understood better how these comrades impacted on Trinidad/Tobago’s. life. Politicians of all stripes visited his home in Railway Avenue, organising, strategising, envisioning.

He appreciated very much what Cuba had achieved.

He lived to see the spirit of the Union wither…but he always heeded the call. Again I recall the teachers were protesting in Port-of-Spain. We are noting the absence of so many trade Union leaders and who steps out of a car…The Bull.

He lamented the loss of interest in building cadre in the Union, especially how the Pointe-a-Pierre Branch has become a shadow of itself.

It is fitting that he will be laid to rest in the cemetery at the R.C. church in Pointe-a-Pierre, alongside Mr. Daniel, Ms. Ada, Mr. Martin and others who formed the community in his time. Bull can also still gaze at the hospital gate, the waterfront, the refinery, the Beaumont Hill community centre and the site of the police station.

These are the places where he spent life struggling, lying under the big tree roaring, “Who goes there!”