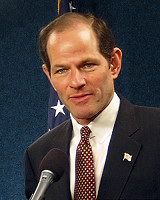 It’s kind of sad. A brilliant governor with an exciting future brought low because he couldn’t keep his penis in his pants. From all reports, he seemed to be happily married with an adorning wife and three devoted children. Yet, he could not resist the lure of high-class prostitutes on his occasional visits to Washington, D.C.

He needed the exhilaration that comes from living on the edge; the excitement that transgressive behavior generates. Here is a man who knew the dangers of getting involved in a prostitution ring trying to hide the payments he made and sources from which these payments came. He had prosecuted such rings before. Yet, the unfolding drama called for a playwright of Euripides’s stature (he was a Greek playwright), to capture the tragic nature of Governor Eliot Spitzer’s fall from grace.

The Greeks had a word for this kind of behavior. They called it hubris: that is, excessive pride; an exaggerated arrogance and self confidence; a belief that the normal rules of the game do not apply and therein lay his tragic flaw.

For eight years Spitzer labored as attorney general of New York State. He made his name prosecuting high crimes of misdemeanors and misdeeds. He became known as the Sheriff of Wall Street. He had brought down the power brokers on Wall Street and cracked several prostitution rings. In 2004, after arresting 16 persons involved in running a prostitution ring, he declaimed: “This was a sophisticated operation with a multilayered management structure. It was however, nothing more than a prostitution ring.”

As fate would have it, the same kinds of cases that Spitzer prosecuted and which made him famous were the same kind of case in which he became entrapped. He had made a name for himself by enforcing the law; now he was faced with the prospect of having the same law used against him.

But if this were a tragedy, the question remains: what make men of power indulge in these tawdry affairs knowing full well, as a West Indian saying goes, “everyday the bucket go ‘a well; one day the bottom ah fall out.” Bill Clinton; Jimmy Swaggert; Jim Baker; Larry Craig; Marion Barry; James Greevey; Ted Haggard (to name a few such men) all seemed to caught up in a tableau viviant strutting their notions of power and invincibility on a secret stage only to be caught eventually.

Such notions of invincibility leads one to ask, What makes these men feel they are not subjected to laws by which most of us feel we must abide. Why do they feel they can preach one thing in public and do a different thing in their private lives?

And then there is the question of the wives of these men who, in the name of “for better or for worse,” suffer public humiliation in the name of these men. How could a man who says that he loves his wife and family lead them to such depths of degradation? On Monday last, at his news conference, there stood a crest-fallen Ms. Spitzer. No words seemed to capture her pain-she said none-no gesture seemed to hide her anguish. In her pain, she seemed to asking, “Wasn’t I enough for you? Did you have to go a young brunette to satisfy your desire?”

Governor Spitzer had gone to many prostitutes before. A few of them knew he was the governor of New York. Apparently, he was a difficult client with extraordinary needs that his wife could not fulfill. He asked the prostitutes “to do things you might not think were safe.” He was never satisfied totally with their services and therefore needed a lagniappe. The young brunette owed the governor about $400 or $500 for previous services not rendered although he paid $4,300 (US) an hour for her services. It was hard to tell what one bought with $4,300.

Once the news broke, Governor Spitzer’s political demise came with lightening speed. On February 13, the FBI recorded the governor’s conversation with the prostitute. They also recorded the prostitutes report to her booking agent about her encounter with the governor. Within a month the governor was sliced toast. There was no constitutional motion; no appeals to the Privy Council; no shenanigans about political bias and the like. One is not too sure how Basdeo Panday and his cohorts would have made out in this environment.

The United States system of law works which is why Steve Ferguson and Ish Galberansingh are fighting their extradition. In the US, if one transgresses the law, one pays for such transgressions. It’s called accountability and taking responsibility for one’s action. One may choose to do wrong but one knows there are consequences if one is caught. It’s a matter of personal responsibility and an understanding that no one is above the law. It’s the first lesson I learned on that August day in 1964 when I first arrived in the United States. It’s an uncomfortable truth that we in Trinidad and Tobago may learn one day.

I hope that our politicians possess the capacity to learn from the tragedy of Governor Spitzer’s demise.

3 thoughts on “The Sheriff of Wall Street”