For those who are having the Cable TV and Internet upgrades, here is what to expect:

They would call you and tell you that your home is scheduled for an upgrade, but they would not tell you upfront that the upgrade means a rewiring of your house, which, depending on how many television sets you have and the parts of the house they are placed, could take an entire day.

Although the Flow cable (Columbus Communications Trinidad Limited) vehicles have water coolers, be prepared to be asked for water continually. You would also have to overhear cellphone conversations continually as their phones ring all the time, and they do speak rather loudly. They would also come to your home with dirty boots, so your carpets would need some work after. 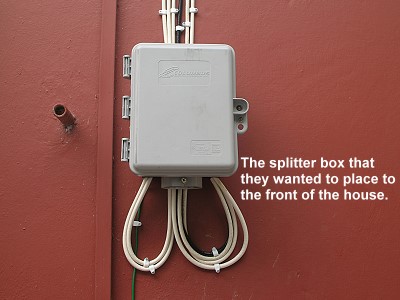 Here is how it went for us:

After the van with two workers came by, they informed us that they had to install a box and that they wanted to run the cables to the front of the house because they believed that it was easier to work from there. I informed one of the workers that we cannot allow the box to be placed there and that he kindly place the junction box to the back of the house and split the cables from there. They haggled a bit to do it their way but I insisted that they should not put the box to the front of the house. I also showed them an electrical conduit and explicitly told them that they should not affix any cables there as it would soon be removed by an electrician. They agreed and proceeded to work.

One guy asked for water and we got him some of bottled water. Then the other worker wanted too and we also got him some.

A workman’s cellphone rang and he chatted for a while. I later learnt that the workman on the cellphone was training the other workman.

The older worker asked for an electrical outlet for his drill and I pointed out one nearby to him. Then his cellphone rang again, so he chatted some more. After the chat, he came through the house in his boots without wiping his feet and inspected the various rooms in the house with television sets and where we have internet access. He proceeded to his van and took out ladders and other tools. On his way back I heard the very loud ring tone from his cellphone so I knew he had to attend to another ‘important’ call. 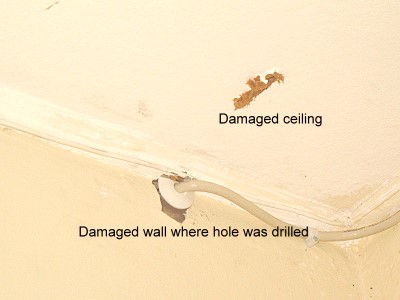 Flow damaged the wall and ceiling

They eventually started to work. He began by running the cable behind the house to the first bedroom. While he drilled from outside, I watched from inside and communicated to him via the window on the wall. After he bore through the wall, I asked him to hold on before he drilled into the ceiling. He stopped. After a while, and without the go-ahead, he continued drilling and, as I warned, he damaged the ceiling.

Between running cables and answering the cellphone, the work grinded on for several hours. With each hole they drilled a bit of extra concrete broke away from the back of the wall. I pointed out to the head workman the size of the chunks of concrete that broke off and he informed me that it is normal for this to happen when drilling. He said that I could just mix some cement and fix that for myself. The other workman waded in and said that he always keeps some sand and cement home for fixing those things and that I should keep some cement and sand to fix those things too. 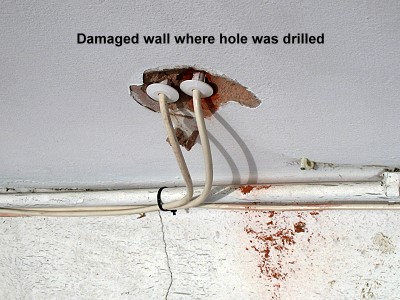 I was stunned, to have these guys damage the house repeatedly and then to be telling me to do the masonry for myself. I wonder if they would have told a White homeowner the same. I doubt it. I decided to move away and just let them continue. I resigned myself to putting up with some mess and damage as the workmen seemed unable to be careful and tidy.

After a few more hours, I went outside to see how far they had reached. I then observed that they had strapped the cables to the same electrical conduit which I had previously told them not to do. (See above) 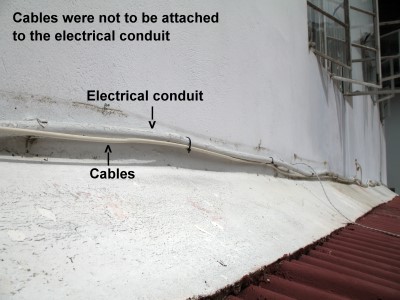 Cables affixed to the electrical conduit

I pointed this out to the workman in charge and he assured me that when they were finished running the cables, they would fix it. They continued running wires and chatting on cellphones while I just hoped this could be over. It was getting dark so I decided to stay and watch what was being done and I even assisted at times.

They plugged in the television sets to the new cable boxes and I immediately observed that the quality of the picture was not an improvement. I did not voice this observation to the workmen…I just wanted them to remove the cables from the conduit.

After many hours in an upsetting environment, the head workman asked me to sign a document. I asked him what the document was about and he said it was to show that the job was completed. I informed him that the job was not completed and that they had to fix the cables that were badly attached to the conduit above the garage. I also asked him if the new high-speed internet access was working. He said the internet signal was weak, so we would not have Internet service tonight as there appears to be a problem in the area. 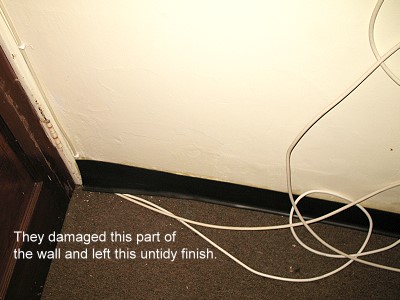 We were left without cable Internet access and a very untidy home. He also told me that they were not supposed to run any cables on the roof area of the garage (where the conduit was) and that he was just doing me a favour. I asked, “What? You were here all this time doing me a favour? That is news to me.” He did not fix the badly run cables and proceeded to his van. He met up with the other workman who was already in the van and they eventually left.

I called Flow cable office and reported the bad job and asked that they have it repaired. The person who answered the phone said she would pass the complaint to the supervisor who would call me. I am awaiting that call and the repairs to my house.

Send us your stories and photos of abuses and poor service in Trinidad and Tobago. Submit your stories with your name and a contact. If you want your name withheld from publication, please state in your submission.
Email: trinidadandtobagonews@yahoo.com

31 thoughts on “Flow Cable Upgrade Can Downgrade Your Home”