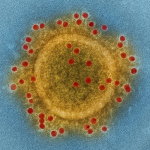 Some people see the world as an infinite number of prize fights, each with one winner and one loser. For them life is an unending series of these zero-sum games. Unfortunately, one of these people is the President of the United States.

One example of something that is not a zero-sum game is a global pandemic. Someone else’s sickness is for me not again but a threat. No nation gains from the toll in another nation. To fight against the contagion, the main weapon is cooperation, on all levels, from interpersonal to international. On the international level, sharing resources and information is essential, because any vulnerability of any nation threatens the people of all other nations.

The nations fighting one another in World War I thought the opposite. So each one, including the US, treated the growing epidemic of 1918 as a military secret. The existence of the killer virus became public only because Spain, which was not one of the warring nations, refused to censor news about the disease. Estimates of death from the 1918 pandemic range from 17 million to 100 million. The war directly killed 53,000 Americans. The virus killed between 500,000 and 675,000 Americans. A deeper look would reveal that the ravages of the war, together with the perverted culture of war, were the pandemic’s greatest enablers, if not its causes.
Full Article : counterpunch.org

One thought on “What Is Covid-19 Trying to Teach Us?”