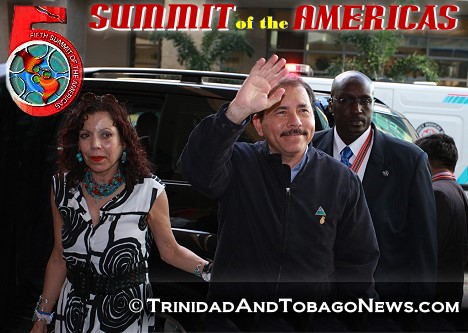 Nicaraguan President Daniel Ortega arrives for the opening
ceremony of the Fifth Summit of the Americas – April 17, 2009

Speech by His Excellency Honourable Daniel Ortega Saavedra, President of Nicaragua, on April 17 2009, during the Opening Ceremonies of the Fifth Summit of the Americas in Trinidad and Tobago.

Distinguished Honourable Prime Minister of the Republic of Trinidad and Tobago Patrick Manning, distinguished men and women, heads of state and government participating at this Fifth Summit of the Americas.

I have had the opportunity of meeting on three different opportunities and different occasions with Presidents of the United States. With President Reagan, right in the midst of a war of aggression, when in dealing with that war Nicaragua resorted the International Court of Justice in the Hague and it was precisely on April 9th, in the month of April, when Nicaragua filed it’s complaint against the policy; the terrorist policy that was being deployed by President Ronald Reagan at the time on behalf of the United States, even though we knew very well that the American people, huge majorities of people were condemning that war and we knew that in the US Congress there was also a majority of congressmen that was able to establish some restrictions, some limitations on the war that was being waged against Nicaragua. So, our crime? Having gotten rid of the charity of Anastasio Somoza, imposed upon us by the intervention of the Yankee troops in Nicaragua.
Full Article : trinidadandtobagonews.com