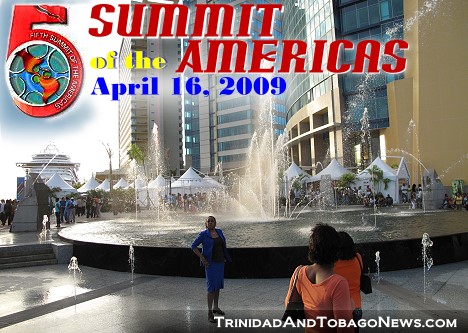 » Castro and the Summit of the Americas
Cuba, and in particular its former President, Fidel Castro, is already a player at the fifth Summit of the Americas which takes place Friday and Saturday, April 17 and 18, in Port of Spain, Trinidad. That much is evident from information coming out of Havana, Moscow, Santiago de Chile and La Paz in recent days.

US president, delegation to stay at Hilton

Obama at the summit

Obama, Caricom meet tomorrow
A meeting between US President Barack Obama and all Caricom leaders is being organised “tentatively” for tomorrow night…

Clinton: US ready to listen
Washington-Secretary of State Hillary Clinton said yesterday that the Obama administration is reviewing a US policy of deporting undocumented Haitians and left open the possibility of expanding travel to Havana beyond the families of Cuban exiles in the United States.

Tight security in place for summit

US fighter jets land in Grenada

Activist takes to the streets
CHILD rights activist Verna St Rose Greaves yesterday chose to take her lobby outside the Hyatt Regency, instead of attending the Civil Society forum, which was taking place metres from where she held her one-person demonstration, outside the Carnival Victory cruise ship.

Watch who donates to you
CIVIL Society Organisations (CSOs) must be careful from whom they accept donations, warned a Canadian scholar/activist at the civil society forum onboard the cruise-ship, Carnival Victory, which is docked at Port-of-Spain.

No invitations yet for backbenchers, Opposition

Don’t blame average joe
THE VOICES of union leaders throughout the western hemisphere all echoed with similar sentiments yesterday at the Workers’ Forum of the Americas, that the average person should not be the ones to pay for a crisis they did not create.

The Summit – what makes news
I have heard a few Trinis complaining about the foreign media, here in vast numbers during the Summit of the Americas, showing TT in an unfavourable light. Apparently teams of news and current affairs crews have been wandering around Port-of-Spain, camera lenses and eyes focused on what our proud citizens do not want them to see. My question is what else do you expect?

Problems still plague summit organisers
SUMMIT officials yesterday admitted that the evacuation procedure at Tower C of the International Financial Centre, which houses the Secretariat for the Fifth Summit of the Americas, was not followed according to regulations set by the Fire Service, when the alarms went off in the building, on Tuesday.

Frustration as badge machine breaks down

Official: Only 25 reporters for each event

PBR off limits to maxis tomorrow